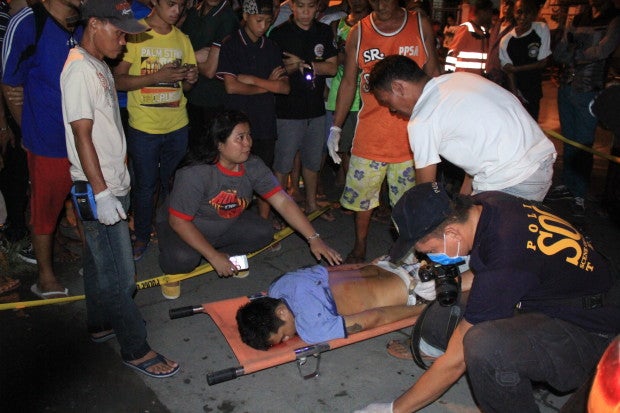 A female relative of Em Lusarez talks to a personnel from a funeral parlor while SOCO personnel process the crime scene. ROBERT DEJON/INQUIRER VISAYAS

ORMOC CITY — A contractor was killed in what the police claimed was a shootout during a buy-bust operation in Barangay Alegria, this city on New Year’s Eve.

Recovered in his possession was the P500 in marked money, as well as a small pack and a medium-size pack containing shabu.

Senior Insp. Joseph Joevil Young, Caidsoft head, said Lusarez was in the list of suspected drug pushers but didn’t surrender to the police during the Oplan Double Barrel.

Instead of stopping his illegal drugs operation, he said Lusarez changed the way he conducts his business—he would deliver the shabu to the clients instead of the latter coming to him.

On New Year’s Eve, an undercover policeman and Lusarez agreed to meet at the foot of the bridge in Barangay Alegria.

Lusarez was inside his car to deliver the P500 worth of shabu.

When he noticed that he was dealing with a policeman, he drew his gun. But the companions of the undercover policeman shot him. CDG