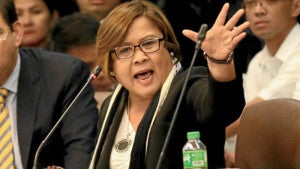 Sen. Leila de Lima’s top wishes for the new year are a peaceful personal life, a reformed President Rodrigo Duterte, and enlightenment for his supporters on his controversial policies.

De Lima has had to face a fire storm in her first six months in the Senate, accused by Mr. Duterte and his allies of taking payoffs from convicted drug bosses serving their sentences at New Bilibid Prison as punishment for investigating, as chair of the Commission on Human Rights in 2009, extrajudicial killings in Davao when Mr. Duterte was mayor of the city and for defying, as chair of the Senate committee on justice and human rights, his order to Congress not to investigate his brutal war on drugs.

“I wish for an atmosphere of truth-telling and accordingly those who lied and testified against me be stricken with conscience. I wish for a serene personal life, free from hypocrisies and betrayals,” De Lima said in a text message.

The former justice secretary has seen her personal affairs laid out in public, with her former bodyguard and lover Ronnie Dayan, allegedly her bagman, being examined in a House of Representatives inquiry.

In her text message, De Lima also wished Mr. Duterte would have a change of heart and put an end to his bloody campaign against illegal drugs.

More than 6,000 drug suspects have been killed by police and unknown assailants since Mr. Duterte assumed office on June 30. Most of them were poor, small-time users.

“I wish for the President to regain a sense of morality, and compassion for the poor who remain victims of his drug war,” De Lima said.

“I wish for the deliverance of this country from killings, lies, deceptions and manipulations,” she added.

De Lima also expressed hopes for enlightenment among Mr. Duterte’s supporters, who have heavily criticized her on social media.

“I wish enlightenment for his supporters, and the realization that the way forward for this country is not more hate and bloodshed, but love and understanding for our neighbors,” she said.

“I wish for a people turning away from the evil of fear and hatred, and going back to the God of love and charity,” she said.

De Lima has repeatedly denied the charges against her, saying they were part of efforts to discredit her because of her criticism of human rights violations in Mr. Duterte’s war on drugs.