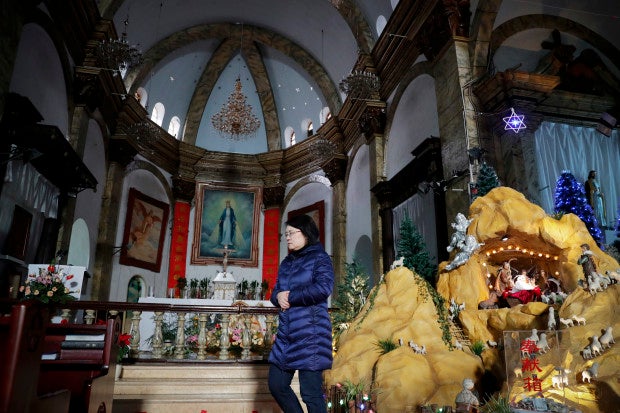 A woman walks past a decoration displaying a baby Jesus doll part of a Nativity scene at the Nantang Catholic Church in Beijing, Wednesday, Dec. 28, 2016. China’s head of religious affairs said that Beijing is willing to have constructive dialogue with the Vatican but stressed that Catholics should “hold up high the flag of patriotism” and adapt Catholicism to Chinese society. AP

BEIJING, China — One of China’s top leaders has told Chinese Catholics that they need to operate “independently” of outside forces and promote socialism and patriotism through religion.

Yu Zhengsheng’s Thursday speech came at the end of a meeting of China’s official Catholic Church that was being closely watched by the Holy See. Yu is one of seven members of the Politburo Standing Committee, China’s top decision-making body.

State media reported that Yu called on Catholic churches to adhere to “socialism with Chinese characteristics.”

China and the Vatican have long clashed over whether the party-controlled Chinese church could appoint bishops and administer churches outside the authority of the Holy See.

Beijing severed relations with the Holy See in 1951, though Pope Francis has signaled his openness to new dialogue with China. CBB/rga