Erap better but advised to rest by doctors, says daughter 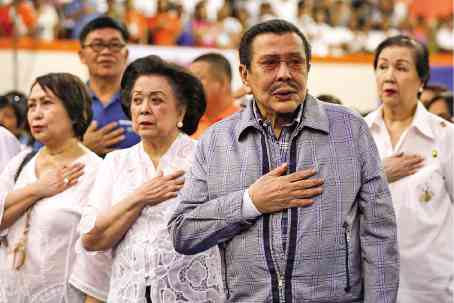 Manila Mayor Joseph Estrada’s daughter, Jackie Ejercito,  said on Thursday that her father was in “very good condition” a week after he was hospitalized for asthmatic bronchitis.

Ejercito, who led the city government’s gift-giving activity for around 9,000 residents at San Andres Sports Complex, said that Estrada was unable to make it because his doctors had advised him to rest.

Earlier, a media advisory said that he would personally preside over the gift-giving.

“He is in very good condition now. His cough is not that bad anymore but he should just rest,” Ejercito told reporters.

According to Ejercito who chairs the Mare Foundation, a nonprofit organization assisting the city government in its various outreach programs, her father had asthmatic bronchitis, not pneumonia based on the doctors’ findings.

Doctors also advised him to rest as his condition may lead to pneumonia, she said.

“He needs to really rest. It’s like he doesn’t know how to rest,” she added, noting that her father reports to work early and comes home late, even during holidays.

“He is always on the go …  but right now after he was hospitalized, he is OK now,” she said.

Estrada was taken to Cardinal Santos Medical Center in San Juan on Dec. 21.

A statement from city hall later clarified, however, that the mayor had an “asthma attack.”

Estrada was discharged on Saturday, with city officials saying he reported back to work on Tuesday.