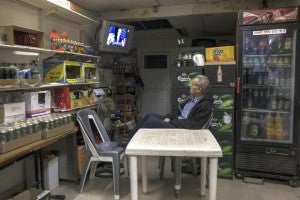 An Israeli grocery store owner watches the US Secretary of State John Kerry speech at the State Department at Washington, in Sderot near the Israel and Gaza border, Wednesday, Dec. 28, 2016. Israeli Prime Minister Benjamin Netanyahu’s office is denouncing Secretary of State John Kerry’s Mideast policy speech, saying it was “skewed against Israel” and “obsessively” focuses on Israeli settlements. In a statement, Netanyahu’s office says the speech “barely touched upon the root of the conflict — Palestinian opposition to a Jewish state in any boundaries.” (Photo by TSAFRIR ABAYOV/AP)

Netanyahu’s angry statement, delivered at a late-night news conference shortly after Kerry’s address, capped a tumultuous week in which years of tense relations with President Barack Obama boiled over.

“We are not about to be swayed by a mistaken policy that could cause big, big damage,” Netanyahu said, speaking in English. “Israelis do not need to be lectured about the importance of peace by foreign leaders.”

In a farewell speech at the State Department, Kerry outlined his vision for Mideast peace. While his speech included criticism of Palestinian violence and incitement, his strongest words were aimed at Israel, and its policy of settling its citizens in occupied territories claimed by the Palestinians. He said the continued settlement growth is threatening the possibility of a two-state solution, which Netanyahu has endorsed.

“The settler agenda is defining the future of Israel. And their stated purpose is clear: They believe in one state,” Kerry said.

He also defended Obama’s move last week to allow the UN Security Council to declare Israeli settlements illegal, the spark that set off a nearly weeklong diplomatic spat between Israel and its most important ally.

“I must express my deep disappointment with the speech today of John Kerry, a speech that was almost as unbalanced as the anti-Israel resolution past at the UN last week,” Netanyahu said.

He accused Kerry of paying “lip service” to decades of Palestinian violence against Israelis, while spending “most of his speech blaming Israel for the lack of peace.”

He repeated his position that Israel is ready to pursue peace through direct negotiations with the Palestinians. Netanyahu, whose government is dominated by West Bank settler supporters who oppose Palestinian independence, says international dictates in favor of the Palestinians undermine the negotiating process.

“Israel looks forward to working with President-elect Trump and with the American Congress, Democrats and Republicans, to mitigate the damage that this resolution has done and ultimately to repeal it,” he said. He expressed hope that the Obama administration will not pursue any more moves against Israel at the U.N. in its remaining time in office.

Netanyahu and Obama, who took office in 2009 just months apart, have had chilly relations throughout their tenures.

The Obama administration has been a vocal critic of Netanyahu’s policies and questioned his commitment to peace. Netanyahu has harshly criticized the US-led nuclear deal with Iran.

Although Trump has not outlined his Mideast policy, he has signaled that he will be much more sympathetic to Israel. He has appointed a West Bank settler ally as his ambassador to Israel and vowed to move the US Embassy from Tel Aviv to Jerusalem, over Palestinian objections. –JOSEF FEDERMAN/AP