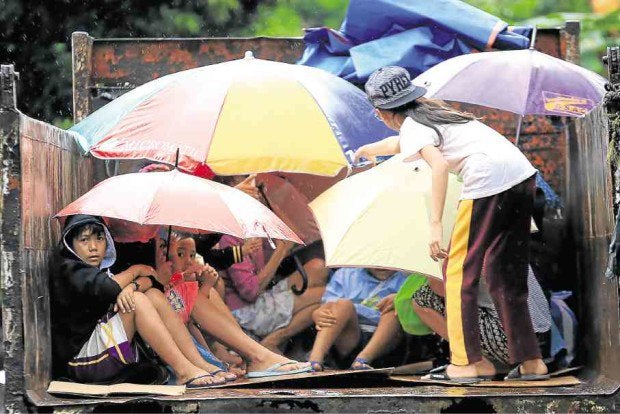 Evacuation from Typhoon Nina in the Bicol Region: The typhoon has caused havoc not only in Bicol but parts of the Calabarzon and Southern Tagalog as well. (AFP FILE PHOTO)

LUCENA CITY, Quezon – Quezon Gov. David Suarez said on Tuesday his province would likely declare a state of calamity to tap government funds for relief operations after receiving reports that 28,400 residents of the province have been adversely affected by Typhoon Nina.

Suarez said they would make the decision after completing the inspection of the havoc left by “Nina” (international name: Nock-ten).

“I’m on my way to the affected areas already. PDRRMC (Provincial Disaster Risk Reduction Management Council) will meet today (Dec. 27) to assess the damage. Determination of a state of calamity will follow,” Suarez said in a text message Tuesday morning.

Records of the Provincial Social Welfare and Development Office have shown that the typhoon has displaced 28,400 persons (6,146 families) in 26 towns in one way or another.  This means they either lost their homes or saw their properties damaged; lost some form of livelihood; or had to evacuate for safety.

An undetermined number of typhoon victims, particularly those with damaged houses, still remained in evacuation centers, as of Tuesday.

The collection of data was still ongoing, as of Tuesday.