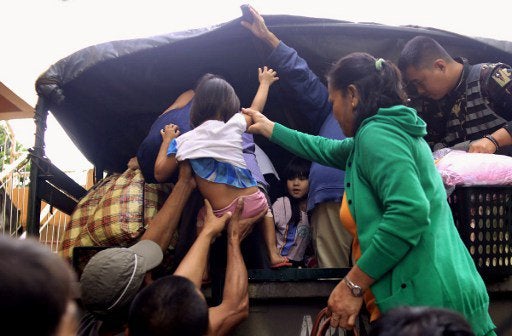 LEGAZPI CITY, Albay — As the weather improved in the Bicol region on Tuesday, disaster response and local government officials faced the difficult task of rebuilding from the devastation wrought by Typhoon “Nina” (international name: Nock-ten).

Survivors of the strongest typhoon to have hit Bicol this year have been pleading for drinking water and food as relief workers try to penetrate hardest-hit communities in Camarines Sur, Albay and Catanduanes provinces.

On Monday, government records showed 54,053 families (211,140 people) had left evacuation centers spread out in the region.

However, 280 families (1,012 people) living in Barangay Sta. Cruz in Libon town, Albay province had to stay behind in evacuation centers due to flooding in their communities.

The flooding was caused by water overflowing from the Libon-Bato Lake.

“They will stay in the evacuation center probably for three days until the floods subside,” said Ian Secillano, head of Libon municipal disaster risk reduction and management office.

Cedric Daep, Albay Public Safety and Emergency Management Office (APSEMO) chief, said the province would have to rely on local resources while waiting for assistance from the national government.

Damage to rice, vegetables and coconut in Albay has reached P6.4 million, a partial report from APSEMO showed.

“Right now, our main priority is to determine the needs of those affected,” Daep said.

He said the towns of Polangui, Libon, Tiwi and Malinao were the heavily damaged areas.

The Department of Social Welfare and Development (DSWD) in Bicol said the typhoon destroyed 9,941 houses and damaged 17,882 others.

In Mimaropa region, Rolando Josue, chief of the Marinduque provincial disaster risk reduction and management council head, said his province was one of the hardest-hit provinces, with the typhoon damaging coconut plantations and agricultural areas.

Josue said their food and water supplies might only last a few more days. Power has not been restored in the province  as of Tuesday, while reports said supply of gasoline has been running low.

“Rice fields are destroyed and no one’s sailing out to fish. Our assessment is we will need food supply for three days just for the recovery (period),” he said.

Daep said the four typhoon-related fatalities in Albay were due to “evacuation failure.”

“If we had no preparedness, there would be hundreds of casualties. We should blame the community for not evacuating. If they die in evacuation centers, that’s our failure,” he said.

The latest fatality in Albay was Gregorio Tadeo, 60, who was found dead inside his house in San Roque village in Polangui town. Police said Tadeo was hit by wooden post as the typhoon battered the region.

In Marinduque, an eight-year-old boy from Boac town was so far the lone typhoon-related fatality in the province.

Josue said the child drowned after he tried to retrieve a coconut in a swollen river.

Officials of the capital Calapan declared the city under a state of calamity on Tuesday morning due to the typhoon damage, Mayor Arnan Panaligan said.

The Oriental Mindoro provincial board convened on Tuesday to tackle the request of Gov. Alfonso Umali Jr. to also declare the province under state of calamity.