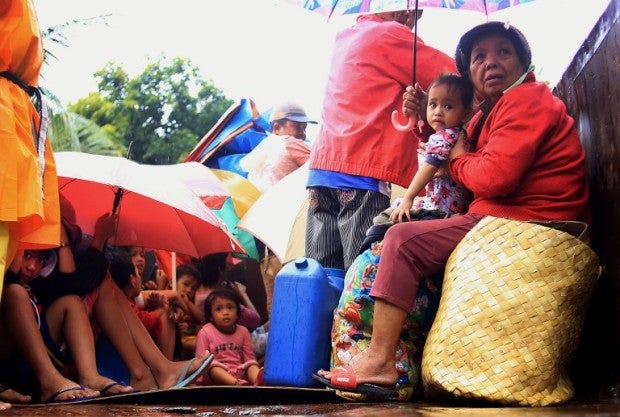 Residents sit in a truck after the local government implemented preemptive evacuations at Barangay Matnog, Daraga, Albay province on December 25, 2016, due to the approaching typhoon Nock-Ten.
Babies, toddlers and old people were loaded onto military trucks in the Philippines on December 25 as thousands fled from the path of a powerful typhoon barrelling towards the disaster-prone archipelago. / AFP PHOTO

Vice President Leni Robredo on Monday sent her sympathies to victims of Typhoon “Nina” which battered the Bicol region.

Robredo, who is in the United States for a family reunion, has been “monitoring and directing the Office of the Vice President to work with regional officials and agencies in setting up local relief centers for immediate emergency response on the ground,” her spokesperson Georgina Hernandez said in a statement.

“Our sympathies to the families who spent their Christmas in evacuation centers due to Tropical Storm Nina.  But we have faith in their resilience borne from many previous experiences,” Robredo said.

The OVP, according to Hernandez’ statement, is also coordinating with the Angat Buhay partners and other groups in Manila for donations, both food and non-food items, that can be transported and distributed to typhoon victims in Bicol.

“The Vice President has been in constant communication with her team since Friday. She has also deployed a team in Bicol to assist local relief operations,” the OVP statement said.

The Vice President travelled for a family reunion to the US for the break, which was planned more than a year ago.  She will be going home to Naga as soon as she arrives, the statement added.

“In the spirit of Christmas, let us give hope to many of our brothers and sisters and enable them to bounce back faster from this latest trial in their lives,” Robredo said. JLDJ