Officials warned 2.5-meter high waves and landslides posed the biggest threats as Nina closed in on the eastern section of Luzon and nearby islands.

“We went around with megaphones and gave instructions to our people to eat breakfast, pack and board the military trucks,” said Alberto Lindo, an official of Alcala, a farming village of 3,300 people near the active Mayon volcano.

“There are large ash deposits on the slopes. Heavy rain can dislodge them and bury our homes in mud,” he said.

Philippine and international weather services said Nina was set to hit Catanduanes on Sunday night before reaching the rest of the main island of Luzon on Monday. 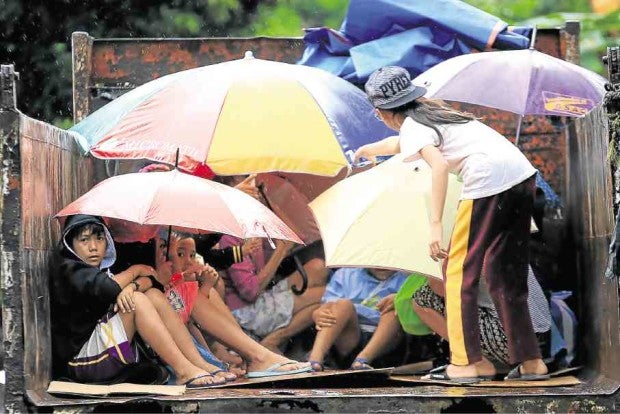 LEAVING HOME ON CHRISTMAS Residents of Daraga, Albay province, are given a ride in the back of a truck after heavy and incessant rains brought by Typhoon “Nina” (international name: Nock-ten) drive them to evacuate to higher ground. —AFP

Inquirer reporter Fernan Gianan reported from the Catanduanes capital of Virac that heavy rain was hammering the area and strong winds had felled trees in the city center. “We can see lightning flashes every 10 seconds or so, we must be near the eye of the typhoon,” he said.

The US Joint Typhoon Warning Center has forecast sustained winds of 231 kph and gusts of 278 kph when Nina makes landfall.

The typhoon will affect an area populated by nearly 42 million people, including Metro Manila, which was forecast to be hit on  Monday.

Executive Director Ricardo Jalad of the National Disaster Risk Reduction and Management Council (NDRRMC) said P879 million worth of stockpiled food and nonfood items and standby funds, care of the social welfare department, were ready to be utilized if needed.

The preposition of relief and nonrelief goods in warehouses of the Department of Social Welfare and Development (DSWD) was also continuing in the Calabarzon and Mimaropa regions. The DSWD field office in Calabarzon said it had sent  33,355 family food packs worth P9 million to Batangas, Laguna and Quezon.

The NDRRMC also received first reports of preemptive evacuations in Bicol, with the regional police office saying that 2,200 families or 9,221 people are seeking shelter in 125 evacuation centers.

Most stranded passengers were in ports in Albay, Sorsogon, Catanduanes, Masbate, Camarines Sur and in Allen, Samar.

At midnight on Christmas Day, most evacuees from Barangay Maninila in Guinobatan town in Albay, housed at Guinobatan East Central School, were asleep. There were no songs, no gift-giving and no games, the way they had wanted and planned it to be.

Others who were awake had a simple celebration over a potluck of relief goods.

“Some of the evacuees just slept through Christmas Eve. Each family was given 3 kilos of uncooked pasta noodles and rice at around 7 p.m.,” said Norlito Lebantino, 40. “If we were in Maninila, we would have been a lot merrier because we have a Christmas village socials night there.”

Lebantino was with his seven kids and shared a room with 17 other families.

Virac Mayor Sammy Laynes said some residents had refused to leave their homes despite the threat of storm surge. Power was cut at 3 p.m. in the entire island province as a precaution. As of Sunday afternoon, authorities had evacuated 1,602 families, or 6,957 people, from 26 villages.

For Benilda Loma, 58, from Orosite village in Legazpi City, spending Christmas Eve inside the evacuation center in Ibalon Central School with her nine children and grandchildren was just an ordinary day.

For noche buena, they had rice paired with pork adobo and fish (kusido). She said the barangay officials gave them a piece of round cheese bread. “We ate dinner at around 5 p.m., and that’s our noche buena,” she said.

‘Pray to God to spare us’

Despite the experience, Loma is still optimistic for Christmas. “It’s OK because I am with my family. We don’t need to be sad, instead, pray to God to spare us,” she added.