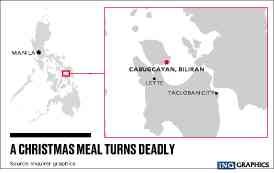 TACLOBAN CITY—An 81-year-old man from Cabucgayan town in Biliran province died while three others had fallen ill on Wednesday after they ate oysters suspected to be contaminated with red tide toxins.

Dr. Nancy Dayap, aquaculturist of the regional office of the Bureau of Fisheries and Aquatic Resources (BFAR), said Agustin Dacalos died at the Naval Provincial Hospital (NPH) in Naval town, Biliran while he was being treated.

Three other residents of the village—Flora Aguang, 71; Emelita Lamoste, 46 and Hernani Gayrama, 71—were also brought to the NPH due to red tide poisoning.

Dayap, in a phone interview, said based on information she gathered from Teresita Anota, village chair of Balaquid, the villagers cooked leaf oysters locally called “masabay” during a Christmas gathering. The oysters were bought from a fisherman from the nearby village of Basud on Wednesday.

Anota and other villagers started to suffer from stomach pains and vomit hours after eating the masabay, Dayap said.

According to Dayap, many of the villagers who survived the poisoning had been given coconut milk to drink. Coconut milk, she said, is effective in flushing out red tide toxins.

Dacalos, the lone fatality, and those taken to hospitals were unable to drink coconut milk.

Dayap said the oysters eaten by the victims may have been harvested from the waters off Carigara Bay, one of seven bays in Eastern Visayas that remain contaminated by red tide.

The gathering, sale and consumption of all kinds of shellfish in these areas had been prohibited.

The BFAR said the level of toxins found in these areas exceed the safe limit for seawater of 10 cells per liter.

It said the density of toxins in these areas is as high as 600 cells per liter.

The BFAR had raised a red tide alert in Irong-Irong Bay in Western Samar as early as June.

In an advisory issued that month, the BFAR said “all types of shellfish gathered from the area are not safe for human consumption.”

The advisory said fish, shrimps, squid and crabs gathered from the area would be safe to eat only after these are cleaned thoroughly, their internal organs removed and they are cooked long enough.