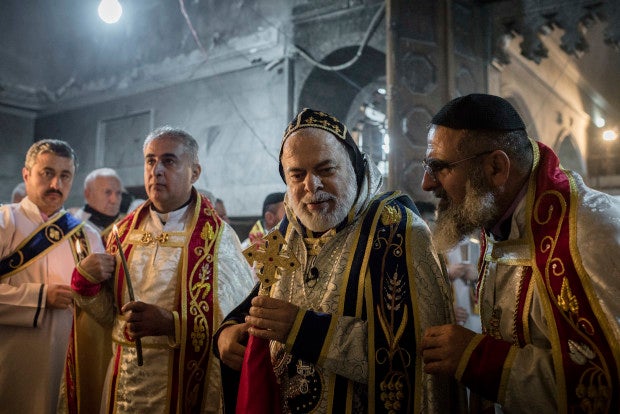 Priests lead a Christmas Eve’s Mass in the Assyrian Orthodox church of Mart Shmoni, in Bartella, Iraq, Saturday, December 24, 2016. For the 300 Christians who braved rain and wind to attend the mass in their hometown, the ceremony provided them with as much holiday cheer as grim reminders of the war still raging on around their northern Iraqi town and the distant prospect of moving back home. Displaced when the Islamic State seized their town in 2014, they were bused into the town from Irbil, capital of the self-ruled Kurdish region, where they have lived for more than two years. AP Photo

BETHLEHEM, West Bank—Thousands of pilgrims and tourists from around the world together with local Christians gathered in the biblical town of Bethlehem to celebrate Christmas Eve in the traditional birthplace of Jesus, with spirits lifted by a slowdown in recent violence and cool, clear weather.

Security was tight in Bethlehem after recent deadly attacks on Christian targets in neighboring Egypt and Jordan by Islamic extremists.

Yet the faithful braved the chilly weather outside the town’s Manger Square as traditional Christmas songs like “Jingle Bells” played in Arabic over loudspeakers and scout groups paraded with bagpipes and sang carols. Elated tourists and local Christians alike wandered around the square illuminated by festive red and golden lights and a large Christmas tree, visiting souvenir shops and restaurants.

Adding to the holiday spirit for the Palestinians, locals celebrated a key diplomatic victory at the United Nations the day before, where the Security Council passed a resolution condemning Israeli settlements in the occupied West Bank.

Sharolyn Knight, a 28-year-old teacher from Georgia, said she was in Bethlehem for the first time and experiencing mixed emotions. “It’s been sobering and humbling because it’s a place with a lot of heavy stuff, religious and historical. At the same time, disillusioning because there is so much strife in the place where Jesus was born.”

She said she would come back again, maybe next time with her kids.

“It’s very unique, I’ve never seen anything like it,” said Rodrigo Reis, 23, who came from Louisville, Kentucky, “It’s very meaningful, its Christmas time, where everything started.”

Christian clergymen welcomed the top Roman Catholic cleric in the Holy Land inside the Church of Nativity in Bethlehem, the birth place of Jesus Christ, as Christians worldwide begin to prepare to celebrate Christmas this year.

The Rev. Pierbattista Pizzaballa, the apostolic administrator of the Latin Patriarchate, is the temporary chief clergyman to the local Catholic population. He traveled from Jerusalem to Bethlehem on Saturday in a traditional procession. Later, he was to celebrate Midnight Mass at the Church of the Nativity, built at the grotto revered as Jesus’ birthplace.

“I wish this joyous atmosphere of Christmas will continue in the year and not just for a few days and I hope the coming year will bring a little more serenity and peaceful relations in our country. We need it,” he said.

“I am happy that the war, at least the military war, in Aleppo is finished and that for the first time in Aleppo the Christians can celebrate without fear the Christmas season. I wish that they can now reconstruct, rebuild the city, not only the infrastructure but also the common relations that was a tradition over there,” he told The Associated Press.

The Syrian government assumed full control of Aleppo earlier this month when rebels, including some Islamic militants, agreed to withdraw from their last remaining enclave after more than four years of heavy fighting over the country’s largest city.

Christmas festivities brought a boost of holiday cheer to Christians in the Holy Land, who make up just a small percentage of the population. The region has which has experienced a wave of Israeli-Palestinian bloodshed that erupted over a year ago. The violence has tapered off in recent months, but has not halted completely.

Rula Maaya, the Palestinian minister of tourism, said all the hotels in Bethlehem were fully booked.

“Bethlehem is celebrating today, we are receiving tourists from all over the world,” Maaya said. “All people over the world are looking at Bethlehem so we hope more and more tourists will come during the year and that next year we will celebrate Christmas without occupation.”

Maaya spoke a day after the U.N. Security Council passed a resolution condemning Israeli settlements in the occupied West Bank.

Julie Suhain, 20, from Ramallah said she was delighted with the UNSC resolution.

“It’s like getting a Christmas gift,” she said. “We’ve been waiting for this for a long time.”

Despite the Christmas cheer, Mideast politics loom large in the background—the concrete barrier that surrounds parts of Bethlehem is just one hulking reminder. It was built by Israel last decade during the second Intifada, or uprising, when Palestinian suicide bombers attacked buses and cafes.

Israeli says the barrier is meant to keep out Palestinian attackers, but because it dips inside the West Bank, Palestinians see it as a land grab that also stunts their economy.

Security was tight in Bethlehem after recent attacks on Christian targets in Egypt and elsewhere in the region by Islamic extremists.

Crowds gather in Bethlehem for Christmas

A merry Christmas in Bethlehem