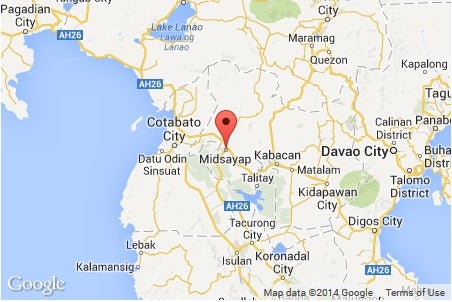 COTABATO CITY – At least 12 persons were injured when unidentified men lobbed a hand grenade toward the road leading to Sto. Nino Parish church in Midsayap, North Cotabato while the Christmas Eve Mass was on going.

Earlier reports said three people were killed, but this was denied by Fr. Jay Virador of the Oblates of Mary Immaculate, co-presider of the Nativity of the Lord Mass.

Virador said the blast occurred at about 9:45 p.m. some 30 meters away from the main entrance of the Church where some people were also standing.

The grenade was lobbed beside a police patrol car parked in front of the Church. One of the police officers was injured, according to Senior Police Officer Johny Caballero.

Supt. Romeo Galgo Jr, speaking for police in Central Mindanao, identified the injured police officer as SPO4 Jhonny Caballero, assigned with Midsayap police office and one of the security officers around the Church.

Also injured were the following:

They all suffered minor injuries except Butan who was rushed to Cotabato Regional and Medical Center.

“We strongly condemn this evil acts, the police will continue performing its duties to ensure safety of all,” Supt. Galgo said.

Fr. Virador said the communion was going on when the blast occurred, sending people on the ground.

Commotion also occurred inside the Church after the blast when someone yelled there was a bag left unattended, sending people rushing out of the church.

“The Holy Mass was abruptly ended, no more concluding prayers as there was a commotion,” Virador said.

“We are saddened by this event when we are supposed to be spreading love and peace on Christmas Day,” Virador said in a radio interview.

Supt. Bernardo Tayong, Midsayap town police chief, said bomb experts are still in the blast site gathering pieces of evidence. There were reports that another grenade or improvised bomb was still in the vicinity of the Church compound.

“Our details are sketchy yet,” he said.

Identities of the victims are not yet available as of posting.