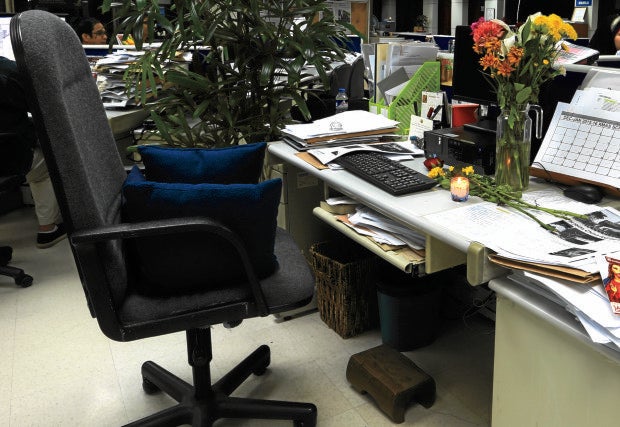 Empty chair and empty table in the newsroom, where LJM will write no more.—EDWIN BACASMAS

IT takes courage to look back on last year’s Christmas Eve, especially when the sheer act of remembering heightens one’s sense of loss. But we in the Inquirer must look back and remember Christmas Eve of 2015, if only to help us embrace the future.

It was exactly a year ago today (Saturday), a few hours before Christmas Eve, when we got a text message from a PR friend asking if it was true that “Tita Letty had passed away.” An ugly joke, we almost chastised the messenger.

In fact, it was no joke. Within that hour, Sandy Prieto-Romualdez, our CEO and president, called up and told me, between sobs of pain, that our editor in chief, Letty Jimenez-Magsanoc, had indeed passed away around 6 p.m. after a cardiac arrest in the hospital. A day before, tests revealed multiple tumors in her liver.

Some of us were in a daze as we went to Misa de Aguinaldo.

Meanwhile, that night, a relatively new editorial assistant, Fazniyara Lukman, who hadn’t gotten the news, sat at the lobby of the nearly deserted Inquirer building, waiting for Mrs. Magsanoc’s driver to pick her up and bring her to the Magsanocs’ home for noche buena. A native of Zamboanga City, Lukman has no family in Manila to spend Christmas Eve with, so “LJM”—or “Mrs. M” as the staff referred to their boss with both fondness and respect—early on, invited Lukman over to her house way before LJM could go on leave, and assured her that the driver would collect her early evening of the 24th. LJM apparently didn’t want Lukman to spend Christmas Eve alone.

No time for goodbyes

Lukman waited but no driver came. She sent a text message to LJM but no reply came. As the eve of Christmas neared, the editorial assistant gave up the wait. LJM must have forgotten about her, she thought.

And that was how abrupt LJM’s death had been on Christmas Eve 2015. There was no time for goodbyes.

And we would never have another Christmas without remembering Letty Jimenez-Magsanoc—the battle for freedom and democracy that was her journalism career and the life that she had shared so unselfishly with her staff and colleagues.

Upon her death, the journalist, whom then President Aquino had introduced to a visiting President Obama as one of the heroines of the 1986 Edsa People Power Revolution, was again in the thick of preparations for battle, so to speak. She was on top of the reportage on the presidential candidates, putting their public service record and character under intense scrutiny, and bannering charges of corruption without letup.

She was passionately raring to go to battle, which the 2016 elections were to her.

She couldn’t have known Rodrigo Duterte would be President, and that his administration would have close to 6,000 drug user/pusher suspects killed in six months. The editor in chief, who kept in the headlines the death of 44 Special Action Forces in the Mamasapano clash, would have had no way of predicting that 44 couldn’t even begin to compare with today’s daily count of “extrajudicial killings” and that “EJKs” would be the most dominant letters in governance today.

LJM hardly had any encounter with the then Davao mayor. As an Inquirer report recalled, their last encounter was in the Inquirer office on the late night of Aug. 25, 2015.  Davao City Mayor Duterte visited the newsroom for a roundtable talk with the editors. LJM didn’t join the meeting until after she had put the paper to bed.

To quote the Inquirer story published after her death: “Because the mayor was insisting that he was not running for President, LJM asked him why then was he in the Inquirer office. ‘If you’re not running, why are you here with such a contingent?’ (Duterte came with at least 20 people).

“When Duterte said that he was invited, LJM retorted: ‘With due respect, Mayor, we did not invite you here.’ (His visit was arranged by his Manila-based supporters.)”

The report added that the mayor nonetheless had an engaging, freewheeling talk with the editor in chief and her editors, and that he stayed until two in the morning.

And upon her death, Mr. Duterte gave warm, endearing words of sympathy.

Sometimes people ask: how would have LJM covered the Duterte administration, how would have been the dynamic between a feisty president and an equally feisty journalist, both of them committed to their respective visions of what the Philippines should be?

While the colleagues whom LJM had left behind hang on to little, isolated anecdotes that remind them of her, they also realize, however, that LJM’s life was a gigantic continuum that impacted national life—from her fight against the dictatorship, to the role of “mosquito press” journalists like her in the 1986 People Power Revolution, to shaping tirelessly the “fearless news” that has become Inquirer’s DNA.

She was a tough act to follow, to put it mildly, but those who came after her continue to pursue the Inquirer’s commitment to the Filipino—the newspaper is an institution of public trust. LJM, especially in the latter years, was always harping on building the Inquirer as an institution, beyond the daily news coverage.

That the institution that is the Inquirer has become bigger than the individual that was LJM—that is LJM’s legacy, apart from her ideals of press freedom and democracy.

That realization, however, doesn’t make us miss her less, especially on these long dark nights.

Apparently, fellow Inquirer editors and reporters thought as much.

Said Juliet Labog-Javellana, chief of Inquirer’s central desk: “We can only imagine what headlines she would have written and stories she would have directed in these confusing and troubling times. That we kept her desk in the newsroom is a daily reminder of the courage and integrity she had lived by to uphold truth and democracy. With that desk, a veritable shrine with daily offerings of flowers and prayers, it feels like she is just around.”

Reporter Nikko Dizon confessed to wiping away tears when she thinks of the late editor. “One time, I remembered her call while I was covering the election fraud in Maguindanao in 2007. I could hear the pride in her voice, but with a choppy signal, couldn’t make out all her words except for these: ‘Keep up the good work, Niks!’ I remember how she made me feel so brave in my first ever foray to Maguindanao, then the kingdom of the Ampatuans.”

Alya Honasan, who puts flowers every couple of weeks “on what remains of LJM’s sacrosanct newsroom desk,” noted how “such a small, confined, ridiculously inadequate space compared to the great big expanse of LJM’s heart, the hugeness of her personality, and the magnitude of her contribution to journalism, in the country as well as in my own life and work. My heart still breaks at how sad and diminished that space is. I just remind myself that she belongs to the limitless universe now, and she will never really be gone as long as I can hear her brazen laughter in my head.”

Pam Pastor, Super editor, still keeps in her wallet a card that LJM gave her some Christmases ago. “Every time I see it, I am reminded of that painful Christmas Eve when we all got news of her passing. It’s hard to believe it’s been a year. There are so many things I miss about her—her guidance, her text messages, her wit, even just hearing her voice in the office or seeing her editing at her desk.”

Pastor recalled how LJM would sometimes ask her “Why don’t I hear cackling?” when they’d run into each other on their way to the ladies’ room.  “That’s the kind of boss she was—she liked hearing laughter in the newsroom, she liked seeing people have fun at work.  My memories of her, the lessons she taught, the passion she continues to inspire—these are the things that I will keep carrying with me, probably longer than that Christmas card I cherish.”

Lukman, who began working at the Inquirer just last year, regrets not having spent more time with LJM. “But her love and legacy transcend every crucial minute before the deadlines that journalists must beat every day. I wish I had spent more time with her and that I could have been more appreciative of the lessons and knowledge she had shared. Her life itself tells the youth to become persistent, passionate and exceptional in their field. Let’s not waste what she fought for.”