Hijackers threaten to blow up Libyan plane diverted to Malta 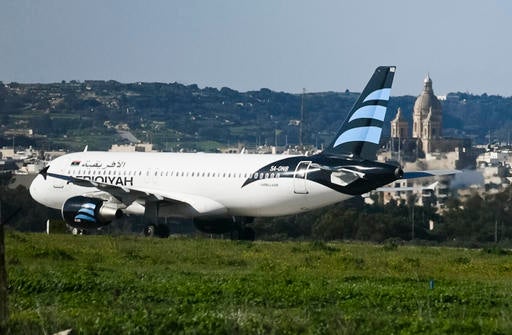 An Afriqiyah Airways plane from Libya stands on the tarmac at Malta’s Luqa International airport, Friday, Dec. 23, 2016. Malta’s state television says two hijackers who diverted a Libyan commercial plane to the Mediterranean island nation have threatened to blow it up. AP Photo/Jonathan Borg

VALLETTA, Malta — Two hijackers diverted a Libyan commercial plane to Malta on Friday and threatened to blow it up with hand grenades, Maltese authorities and state media said.

The Malta airport authority said all emergency teams had been dispatched to the site of what it called an “unlawful interference” on the airport tarmac. The plane’s engines were still running Friday long after the aircraft landed at 11:32 a.m. (1032 GMT).

State television TVM said the two hijackers on board had hand grenades and had threatened to explode them.

All flights into the Mediterranean island airport have been diverted.

Airport officials said the Afriqiyah Airways Airbus A320 flight from Sabha, with original destination Tripoli, had 118 people on board: Maltese Premier Joseph Muscat said that included 111 passengers, 82 men, 28 women and an infant.

Muscat had tweeted earlier that there was a “potential hijack situation” involving an internal Libyan flight that was diverted to Malta and that emergency operations were underway at the airport.