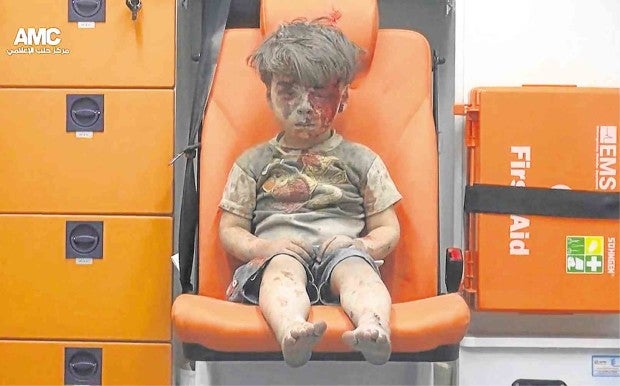 THE FACE OF SYRIANS’ PLIGHT In this frame grab from a video by the Syrian antigovernment group Aleppo Media Center, Omran Daqneesh, 5, stares ahead blankly after being pulled out of a building hit by an air strike in Aleppo, Syria, on Wednesday. Two other children were pulled out from the rubble. ALEPPO MEDIA CENTER VIA AP

BEIRUT, Lebanon—Syria’s conflict has killed more than 310,000 people, uprooted over half the population and left much of the country in ruins since it erupted almost six years ago.

Here are some key statistics:

The Syrian Observatory for Human Rights said last week it had recorded the deaths of 312,001 people since the conflict began with anti-government protests in March 2011.

Those killed included 90,000 civilians, of which 16,000 were children, the Britain-based monitor said.

In a country with a population of some 23 million before the war, the United Nations estimates around 6.6 million people have been internally displaced by the fighting.

READ: No more room for the dead as Syria’s Aleppo is crushed

And almost one million Syrians are besieged by the warring parties, according to UN aid chief Stephen O’Brien.

In November, he said there had been a steep increase in what he called this “deliberate tactic of cruelty”, in particular by the Syrian regime. 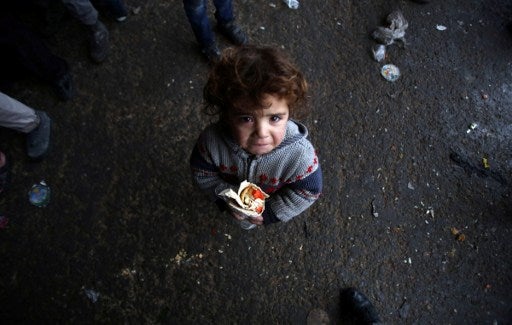 A Syrian child, who fled with his family from rebel-held areas in the city of Aleppo, reacts as he holds a sandwich on December 1, 2016, at a shelter in the neighbourhood of Jibrin, east of Aleppo. AFP PHOTO

The war has forced 4.8 million people to flee Syria, according to the United Nations High Commissioner for Refugees.

Neighboring Turkey has taken in more than 2.7 million Syrians, the UNHCR says, and is now the main host country.

It is followed by Lebanon, with more than one million Syrian refugees, according to the UN.

Jordan, which the UNHCR says has taken in 655,000 Syrians, says it has accepted considerably more, at 1.4 million.

Syrian refugees have in increasing numbers travelled to or attempted to reach Europe, making the perilous journey overground or by sea.

It said more than 17,700 people are estimated to have died in custody since the conflict began.

But it said the real figure is much higher, pointing to tens of thousands of forced disappearances.

The Observatory, for its part, says at least 60,000 people have died over five years from torture or harsh conditions in regime prisons.

The monitor says half a million people have passed through regime jails since the start of the conflict.

And several thousand have died over the same period in prisons run by rebel groups or jihadists, it says.

In February 2016, UN investigators accused the regime of “extermination” in its jails and detention centers.

Experts say the conflict has set Syria’s economy back by three decades, with almost all its revenues cut off and most of the infrastructure destroyed.

The education and health systems are in ruins.

In 2015, a coalition of non-governmental organizations said Syria was living almost without electricity, with 83 percent of lighting no longer working.

More than 80 percent of the population lives in poverty, according to a study published in April 2016 by the United Nations and Britain’s Saint Andrews University.

The study also said the Syrian economy contracted by 55 percent between 2010 and 2015.

Read Next
Happy birthday to Colo: Oldest gorilla in US turns 60
EDITORS' PICK
Gear up and get ready to play with Yamaha Mio Gear
If elected VP, Sara Duterte will push for mandatory military service for all Filipinos
Over 3 Million worth of prizes to be won at Smart Padala’s SENDali Manalo Promo!
Acer starts the year off strong with the Aspire Vero National Geographic Edition
Senate bill seeks to penalize employers requiring employees to work during rest hours
Marcos-era elections: Not what his son signed up for
MOST READ
Vice mayor slams Vico Sotto for turning Pasig into a ‘puro palabas’ city
Jose Manalo’s son Benj pays tribute to late mother: ‘You’re a testimony of God’s love’
‘Sampal sa gobyerno:’ Drilon wants unvaxxed PAO chief barred from working
Bongbong-Sara tandem names 7 candidates in initial senatorial slate
Don't miss out on the latest news and information.