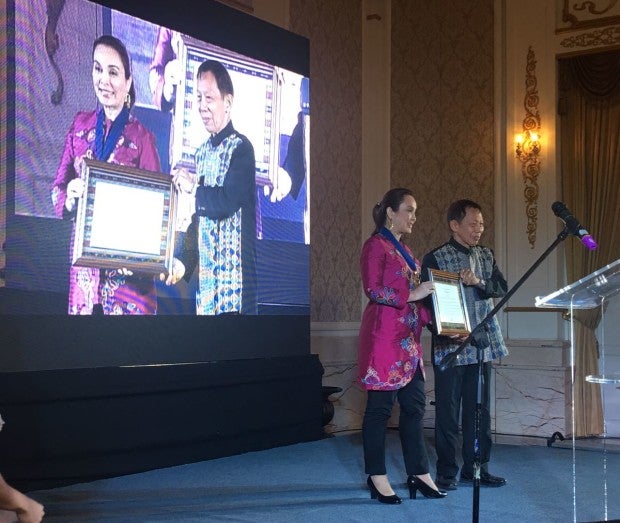 MANILA, Philippines — The National Commission for Culture and the Arts conferred on Sen. Loren Legarda, on Wednesday, a lifetime achievement award for her contributions to the promotion and preservation of Philippine arts and culture.

In rites that brought together dignitiaries from politics and the cultural community, the NCCA honored Legarda with the Dangal ng Haraya Award for being “a staunch supporter of the culture and arts sector” since she was elected senator in 1998.

The Dangal ng Haraya award is a commendation given individuals, institutions and organizations “that have rendered significant and lasting contributions, support, patronage to preservation, development and promotion of Philippine culture and arts.”

In citing Legarda’s outstanding work for Philippine culture, NCCA chair Felipe de Leon Jr. said the lawmaker “has achieved the greatest impact on Philippine society through her pioneering legislations for arts and culture.”

“In a political and social climate lacking in appreciation for our artistic heritage, Sen. Legarda serves as a beacon for her heroic efforts in harnessing her legislative expertise to dignify the loftiest expressions of the Filipino soul,” read the citation.

“She has established a lasting legacy that will serve as a constant inspiration to the present and future generations of Filipinos,” it said.

The NCCA described Legarda as “the foremost proponent in ennobling the Filipino spirit, nurturing national identity and creativity through her dedication, heroic legislative work and enduring passion for the preservation, promotion and safeguarding of cultural heritage.”

Among laws that Legarda passed to protect culture and the arts are the Philippine Climate Change Act, which provides funding for at-risk communities; the Batanes Responsible Tourism Act; the Philippine Tropical Fabrics Law; and the Enhanced Basic Education Act, which incorporates deeper arts and culture education in schools.

The lawmaker was also instrumental in the Philippines’ return to the Venice Art Biennale in 2015, which the country had last joined in 1964.

This year, Legarda, a former broadcaster, saw a return to television through Dayaw, a television documentary series on Philippine indigenous peoples and culture.  SFM