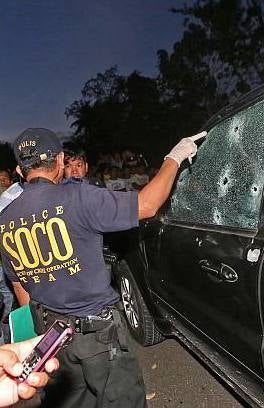 CITY OF CALAPAN — Murder charges have been filed by authorities against two suspects in the killing of a former Naujan town councilor in Oriental Mindoro, police said Wednesday.

Supt. Christopher Birung, Oriental Mindoro provincial director, emailed a copy of their final report to the director of the MIMAROPA (Mindoro, Marinduque, Romblon, Palawan) regional police to the Philippine Daily Inquirer.  The final report said that the case was filed before the provincial prosecutor against two residents of Baco town.

Identities of the suspects have been withheld so as not to preempt police operations, including an ongoing manhunt.

Wilson Adra Viray, 51, was shot to death by two gunmen riding-in-tandem while he was driving his pick-up truck on Nov. 19 at 5:10 p.m. at Sitio 5 Barangay (village) Sampaguita in Naujan.