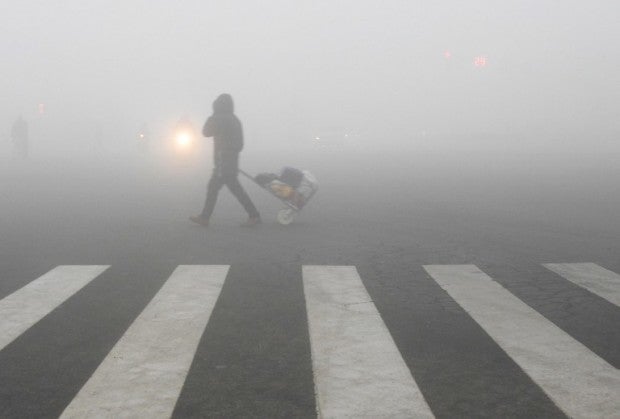 A pedestrian crosses a smog-shrouded street in Lianyungang, eastern China’s Jiangsu province on December 19, 2016.
Hospital visits spiked, roads were closed and flights canceled on December 19 as China choked under a vast cloud of toxic smog, with forecasters warning the worse was yet to come. AFP

BEIJING, China — Heavy smog suffocated northeast China for a fifth day Tuesday, with hundreds of flights canceled and road and rail transport grinding to a halt under the low visibility conditions.

More than 20 cities have entered a state of red alert since Friday evening, implementing emergency measures aimed at cutting emissions and protecting public health from the toxic miasma.

Across the region, construction sites closed and authorities reduced the number of vehicles allowed on the roads in hopes of reducing the thick haze.

In Shijiazhuang, the capital of northern Hebei province, planes could not take off or land, according to a post on a verified social media account of the city’s international airport.

Levels of PM 2.5 — microscopic particles harmful to human health — climbed to 844 in the area, according to the web site aqicn.org.

The number is almost 34 times the World Health Organization’s recommended maximum exposure level of 25 over a 24-hour period.

On the previous day, the count of PM 10, larger particles that contribute to the thick haze, was off the charts, exceeding the maximum reading of 999.

On the streets of Beijing, buildings disappeared into a yellowish haze so thick that the city closed several major highways over safety concerns.

PM 2.5 levels hovered around 400 mid-day, according to data provided by the US embassy in the city.

As of 11:00 am Beijing Capital International airport had canceled 217 flights, it said in a post on its verified social media account.

Trains, too, were running slowly, with at least 11 delays in the capital and another 34 halted in the neighboring port city of Tianjin.

A red alert, issued when severe smog is expected to last more than 72 hours, is the highest of Beijing’s four-tiered, color-coded warning system.

In December last year the capital issued its first ever red alert since the adoption of an emergency response program for air pollution in 2013, despite frequent bouts of serious smog.

Most of China’s smog is blamed on the burning of coal for electricity and heating, which spikes when demand peaks in winter.

The issue is a source of enduring public anger in China, where fast economic growth in recent decades has come at the cost of widespread environmental degradation.

On social media, commenters vented their anger and disbelief at the conditions, which authorities have long vowed to improve.

“I thought Beijing was attacked by a nuclear (weapon) this morning,” said one post on the Twitter-like Weibo microblog.

“My throat hurts and itches, my head hurts, too,” said another.

“I think Beijing people can only stand it and not protest because the Party has tamed us so well.” CBB/rga

Read Next
Strong quake strikes near Solomon Islands; no tsunami threat
EDITORS' PICK
SM continues to send relief assistance to remote towns in Batangas
Beyond water service: Maynilad builds massive infrastructure projects to clean up Metro Manila waterways
BIR grants relief to Taal-affected taxpayers in Batangas
China expands lockdowns to 25M people to halt viral outbreak
Get exciting deals and discounts when you download the new McDonald’s App
Taal Volcano flexes signs of restiveness anew
MOST READ
Taal Volcano flexes signs of restiveness anew
Lacson on Duterte’s threat to end VFA over Bato’s canceled visa: Where is the connection?
Part of Aurora Boulevard in Cubao closed from Jan. 25 – Feb. 1
Passengers from Wuhan, China to be flown out of Kalibo, Aklan – CAAP
Don't miss out on the latest news and information.