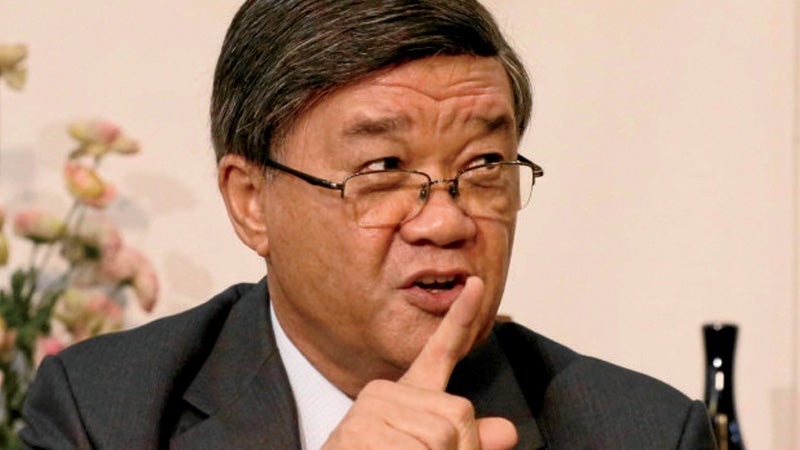 Justice Secretary Vitaliano Aguirre II is pushing for a top-to-bottom revamp of the Bureau of Immigration (BI) as he can no longer work with Immigration Commissioner Jaime Morente.

A mere revamp will not do, according to Aguirre, as he has very little confidence in working with Morente and other top BI officials who have been linked to a bribery scandal.

Aguirre said Morente, a former Davao police chief appointed to the top BI post by President Duterte, was running the bureau like a fiefdom even though it was under the Department of Justice.

“He (Morente) wanted to appoint 18 officials but I disapproved them because they were all part of the old administration under (Commissioner Siegfried) Mison. We can’t move forward if we don’t change the culture and the people,” the justice chief said in an interview with reporters.

He said Morente could only recommend the appointment of people to the BI.

Morente threatened to tell the President that he would resign if Aguirre continued to block his appointees.

“I told him to go ahead because I know and the President knows where I’m coming from. A few days later, he was singing a different song and told me he wasn’t resigning anymore,” said Aguirre, who still hasn’t changed his mind about not working with Morente.

The secretary said that if he had his way, Morente would have gone the way of the latter’s friend, BI intelligence chief Charles Calima, whom Aguirre ordered terminated for involvement in gaming tycoon Jack Lam’s P50-million bribery attempt.

The payoff was allegedly in exchange for the release of 1,316 illegal Chinese workers who were arrested on Nov. 24 in an unlicensed online gaming casino at Clark Freeport in Pampanga province.

Aguirre said the closeness of Morente and Calima, both members of the Philippine Military Academy “Dimalupig” Class of 1981, was evident in the bribery scandal.

Morente was implicated in the complaint that Associate Commissioners Al Argosino and Mike Robles filed against Lam, his representative Wally Sombero, his two interpreters and Calima for corruption of public officials and violation of the the antiwiretapping law. The complaint was filed in the Parañaque City Prosecutor’s Office last week.

Argosino and Robles were accused by Sombero of extorting from Lam P50 million for the release of 600 of the 1,316 illegal Chinese workers caught in Lam’s Fontana Leisure Parks and Casino.

The payoff, done on Nov. 27 at the City of Dreams hotel and casino complex in Parañaque City, was caught on video by Calima.

The associate commissioners countered that the payoff was bribery and that Calima had taken P18 million from the P50 million they received.

Argosino and Robles claimed that P20 million of the P50 million was to be shared with Sombero, Calima’s deputy Edward Chan, Inquirer columnist Ramon Tulfo (who wrote about the P50 million bribe) and Morente.

Mr. Duterte fired Argosino and Robles on the recommendation of Aguirre as the two suspiciously kept quiet about the P50-million bribe for 16 days and declared it only after Tulfo had exposed the bribery/extortion attempt.

Argosino and Robles are “brothers” of the President and Aguirre in San Beda Law School’s Lex Talionis fraternity./rga