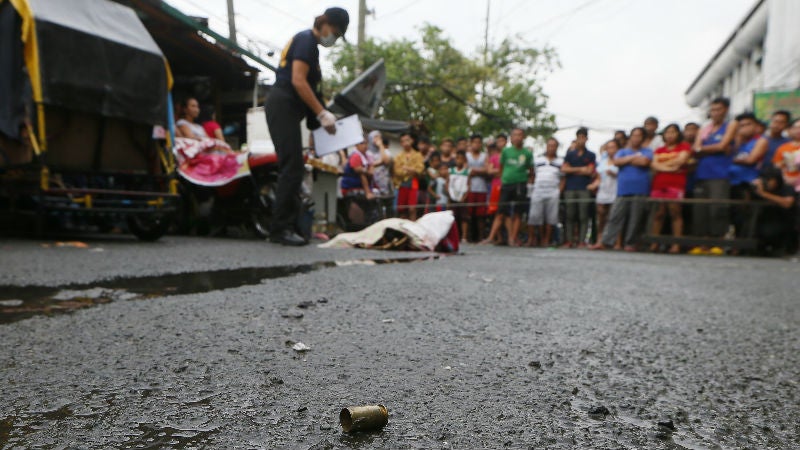 An empty shell of a pistol lies near the body of a woman, later identified by her husband as that of Nora Acielo, after she was shot by still unidentified men while about to bring her two children to school at a poor neighborhood in Manila, Philippines, Thursday, Dec. 8, 2016. Police said the killing of Acielo was the 13th recorded drug-related case in the past 24 hours in President Rodrigo Duterte’s unrelenting war on drugs. (AP Photo/Bullit Marquez)

“Fear is a clear indication belying what the government has been trumpeting all along that people now feel safe to roam around because policemen are weeding the streets of thugs and drug users and pushers.”

Fr. Jerome Secillano summed up on Monday the reaction of critics of President Duterte’s war on drugs following the release of a Social Weather Stations (SWS) survey that showed eight out of 10 Filipinos feared that they, or people they know, could become victims of extrajudicial killings associated with the bloody campaign.

The parish priest of Nuestra Señora del Perpetuo Socorro Church in Manila said he hoped the survey would trigger a “massive public expression of indignation” against Mr. Duterte’s relentless drive that had so far claimed 6,000 lives.

Getting out of hand

“We really need to worry about the killings even without the survey results. Lawlessness is getting hold of the country and it is getting out of hand. The government is no longer in control,” said Manila Auxiliary Bishop Broderick Pabillo.

Commission on Human Rights Chair Jose Luis Gascon called on the administration to pursue its anticrime efforts “with full respect for human rights standards and due process guarantees.”

“Human dignity is far too important a matter to disregard whatever might be the public opinion about the Duterte administration’s war on drugs,” he said.

Sen. Francis Pangilinan said “fear for one’s safety is bound to surface” given that statistics also showed that since the Duterte administration came in on July 1, someone got killed every 40 minutes every day.

“The poll results are proof that people do not feel safe in the streets. The only way to address this is to stop the daily killings,” Pangilinan said in a text message.

Sen. Joel Villanueva said the killings “should be a cause of concern and the recent survey is the affirmation of that.”

“It is time for all of us, especially the government to reconsider other options,” Villanueva said.

With some of the dead being innocents, Sen. Grace Poe said it was understandable there was “fear in the hearts of our countrymen.”

“This fear is further fueled by the apparent inaction against the police officers involved in several questionable murders of unarmed victims, almost making these state-inspired killings,” Poe said.

Sen. Sherwin Gatchalian said many people were “worried about the lack of due process” and urged the government to “quickly show the public that it is making extra efforts to investigate all the deaths.”

“It should also start reforms in our judicial system to improve the pace of prosecution of drug-related cases, otherwise, the fight against illegal drugs will be short-lived,” Gatchalian said.

Sen. Leila de Lima said in a speech at the annual conference on cultural democracy in Berlin on Sunday that she was disturbed that there was no expression of outrage among Filipinos on the daily drug-related killings.

“Whereas I used to think that we, Filipinos, have long learned our lessons about the folly of falling for authoritarian rule under a charismatic and dangerous cult-like leader, I myself am not so sure why we are in this situation once again,” De Lima said.

She lamented that the country elected in May “a self-confessed serial killer as President.”

“We have gotten to the point where we are trying to convince ourselves that we do not hear what we are hearing; that we do not see what we are seeing; that it’s OK for the President to do and say what he does and says because he is just being true to himself, and that’s a good thing; that to speak against the President is to stand against the 16 million who voted for him,” De Lima said.

Sen. Gregorio Honasan II said the killings were “something to be concerned about but we cannot be paralyzed into inaction.”

“What do we do about it? We just cannot leave it on the shoulders of the President or the current government. It takes a nation to raise a child. Unless we get involved say in our homes, in our schools, nothing will happen. We’ll be perpetually paranoid and worried and concerned,” Honasan told reporters.

He said he wanted to look at solutions. He also said the drug problem was a global problem and that extrajudicial killings were also happening in other countries.

Sen. Vicente Sotto III said the survey results proved “there are many people involved in drugs and they know it.”

Akbayan Rep. Tom Villarin said: “When each of us don’t feel safe and worried that death will come to someone we know and love, it means that we are losing the war on drugs. We are losing not just our peace of mind but perhaps our own humanity.” —WITH REPORTS FROM JULIE M. AURELIO, CHRISTINE O. AVENDAÑO, DONA Z. PAZZIBUGAN AND NIKKO DIZON