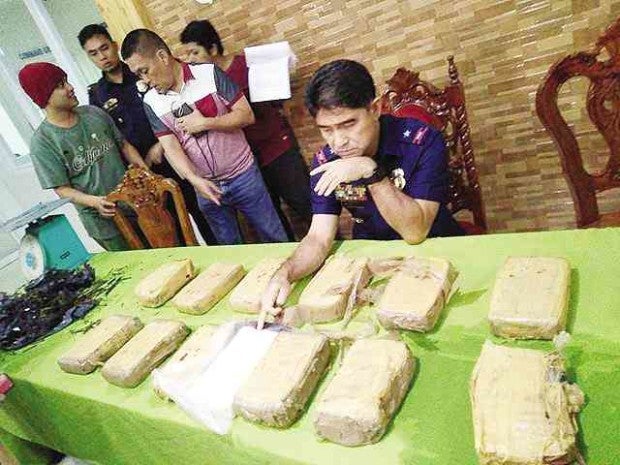 LEGAZPI CITY—At least 18 bricks of cocaine, worth P90 million, were found by fishermen in the waters off Tiwi town in Albay province on Sunday, police said. Chief Insp. Arthur Gomez, information officer of the Albay police, said fishermen Manuel Comota and Razel Bragais found the packed bricks, wrapped in a fishnet, in the waters of Barangay Sugod in Tiwi. Gomez said the bricks were sealed with packaging tape and covered with a rubber bag and plastic. The bag had moss and barnacles, he said. Gomez said the packs of cocaine found here could be part of those recovered in Samar province in 2009. “This is possibly part of the 1,599 kilograms of illegal drugs that were thrown into the sea by Chinese [drug suspects] in Samar,” he said.  —MA. APRIL MIER

LOS BAÑOS, Laguna—The policeman, who was seen on video as he shot a man point-blank in front of a bank in San Pedro City in Laguna province last week, was charged with murder on Monday. Supt. Harold Depositar, police chief of San Pedro City, said their investigation found that PO3 Reynaldo Dizon had used “excessive and unnecessary force” when he shot and killed a man who reportedly ran amok at a bank branch here on Friday afternoon. Police said the man, later identified as Sharief Amatonding, arrived at the bank and became unruly, causing tension among bank employees and security guards. As this happened, Dizon, who was assigned in Biñan City, was on his way to a police operation in Muntinlupa City when the guards flagged his team down. A 52-second footage posted on Facebook showed Dizon as he grabbed and pulled Amatonding by his shirt. Dizon took a few steps back before shooting Amatonding. —MARICAR CINCO

TACLOBAN CITY—New Zealand Ambassador to the Philippines David Strachan has turned over a warehouse, intended for the storage of relief goods funded by his government, to the Philippine Red Cross (PRC). The P12-million facility on Magsaysay Boulevard here is part of the commitment of the New Zealand government to help the country recover from the impact of Supertyphoon “Yolanda” (international name: Haiyan), which devastated the Visayas on Nov. 8, 2013.  Strachan said the three-story facility, which will also serve as PRC’s training center on disaster response, will hasten the delivery of relief goods in Eastern Visayas region. “This will strengthen the capacity of the PRC to provide fast relief response [during a calamity],” Strachan said.—JOEY A. GABIETA

BACOLOD CITY—Police have seized some P400,000 worth of soap, lotion and shampoo that carried brand names belonging to multinational Procter and Gamble Co. but which had been declared to be counterfeit items. Police implemented a total of 10 search warrants for violation of the Intellectual Property Code of the Philippines against several retailers in the city. They had been identified as Ysabelle Celine Fashion Shop and Walk Fashion Accessories on Gatuslao Street and YKK Fashion Accessories on Gonzaga Street, according to SPO2 Joshua Barile of the Negros Island Region’s police intelligence unit. No arrests have been made, according to Barile, but charges for trademark infringement could be filed against the owners of the stores, who have not been identified. —CARLA P. GOMEZ