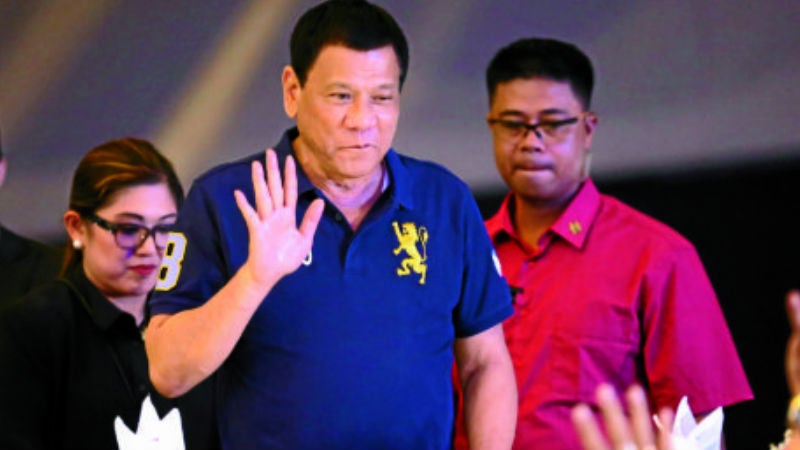 IN PAIN President Duterte has said he suffers from daily migraine and ailments, including Buerger’s disease, a cardiovascular illness characterized by inflammation of blood vessels usually due to smoking. —MALACAÑANG PHOTO

President Rodrigo Duterte’s admission that he used a powerful painkiller has prompted concern about his health, with lawmakers urging him on Sunday to undergo a medical examination and disclose the results.

Mr. Duterte on Monday revealed that he used to take fentanyl, a drug often prescribed for cancer pain and other chronic ailments, because of a spinal injury from previous motorcycle accidents.

The President, however, said his doctor made him stop using fentanyl upon learning he was “abusing the drug” by using more than the prescribed patches.

The firebrand leader has attracted controversy for his brutal crackdown on suspected users of illegal drugs, which has claimed thousands of lives, and his incendiary language against the United States and the United Nations.

The synthetic opioid is 50 times more powerful than heroin.

Lawmakers said Mr. Duterte’s remarks revived speculation about his health, including rumors during the election campaign that he suffered from cancer—a claim Mr. Duterte repeatedly denied.

“To end this speculation, it would be better if his physician explain how the President manages the pain that he suffers,” a Duterte ally, Rep. Carlos Zarate, told Agence France-Presse (AFP).

Zarate added that a medical bulletin would clarify the state of Mr. Duterte’s health, as fentanyl became controversial after pop legend Prince died of an accidental overdose of the drug in April.

Fentanyl, highly potent and addictive, is estimated to be up to 100 times stronger than morphine.

“It is not just the illness itself that we should be worried about, but also the impact or side effects that the medications he is taking may have, especially on his lucidity and ability to make decisions with a clear mind,” De Lima said in a statement on Sunday.

“Our Constitution is clear on this. The public should be informed of the state of health of the President in case of serious illnesses,” she added.

“What if, God forbid, there is an emergency that requires immediate decisions, and the President is under the influence of such a powerful opioid?”

Mr. Duterte, 71, has said he suffers from daily migraine and ailments, including Buerger’s disease, a cardiovascular illness characterized by inflammation of blood vessels usually due to smoking.

He has cited ill health as the reason for skipping events during summits abroad. In Cambodia last week, he said he might not even finish his six-year term.

Another critic, Sen. Antonio Trillanes, told AFP that Mr. Duterte’s admission that he took more than the prescribed fentanyl dosage showed he “qualified as a drug addict.”

Mr. Duterte, however, has denied any addiction.

“When there’s regularity, my friend, when you take it and when there’s a monkey on your back, that’s addiction,” he told a BBC reporter on Saturday.

Doctors said fentanyl was regulated in the Philippines, with physicians needing a licence from the drug agency to prescribe it.

“The ones using (fentanyl) are usually people with harrowing pain or terminal diseases. The doctor monitoring manages risks of addiction,” said Leo Olarte, former president of the Philippine Medical Association.

“A medical bulletin is good so the public won’t be rattled,” he added. —REPORTS FROM AFP AND CHRISTINE O. AVENDAÑO/rga