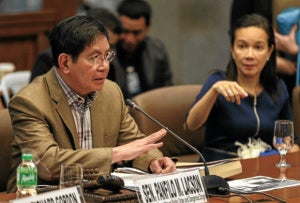 Sen. Panfilo Lacson has closed his committtee’s inquiry into the Nov.5 police killing of Albuera Mayor Rolando Espinosa Sr., saying he would have a conclusion similar to that of the National Bureau of Investigation (NBI): The mayor was murdered by a team from the Criminal Investigation and Detection Group in Region 8 (CIDG-8).

Lacson said on Sunday that his commitee had new information pointing to “premeditated murder.”

“There is only one finding,” he said. “But there would be a difference on how we arrived at our findings.”

He said the findings of the NBI were “more exhaustive and complete” than those of the Committtee on Public Order and Dangerous Drugs, which he chairs.

The NBI has charged over 20 CIDG men, including the CIDG-8 chief, Supt. Marvin Marcos, for the murder of Espinosa.

The committee concluded that the killing was a rubout and not a shoot out as claimed by the raiding policemen.

Last Nov.5, the CIDG team raided the cell of Espinosa at the Leyte Subprovincial Jail in Baybay, allegedly in search of drugs and firearms. During the Senate hearing, the team leader, Chief Insp. Leo Laraga, admitted that he was the one who shot Espinosa, because the mayor fought back.

Lacson held an executive session last Wednesday with government officials and investigators, including Justice Secretary Vitaliano Aguirre II, to discuss “classified matters” and to gather additional data from them to reinforce the findings and recommendations of his committee.

He said that, during the executive session, they took up possible motives in the killing of Espinosa.

He noted that confessed drug lord Kerwin Espinosa, a son of the mayor, had testified that some of the CIDG-8 officers, led by Marcos, were on his payroll. Silencing the elder Espinosa could be among those motives, Lacson said.

Lacson added that his committee had new information on the other possible motive but did not want to elaborate.

But he also revealed a “twist’” that developed in the investigation after the NBI got hold of CCTV footage from a nearby office of the Department of Public Works and Highways (DPWH): The footage showed that the CIDG team entered the jail at 3:05 a.m. on Nov. 5.

During the hearing, Marcos said the team entered the jail at 4:30 a.m. But Scene of the Crime Operatives said the CIDG called them to come to the jail at 3:49 a.m., prompting Lacson to say that the killing of Espinosa was premeditated because these operatives were called ahead of the raid itself.

On Sunday, though, Lacson noted that Marcos had changed his earlier statement at the last hearing, saying that the CIDG men actually entered the jail at 3:05 a.m.

“He ) has a malevolent reason why he changed the timeline,” Lacson said. “There is another motive why he deliberately said it was 4:30 a.m. earlier.”

Lacson recalled that CCTV footage inside the jail had gone missing on the day the CIDG team went there and ended up killing Espinosa.

“Who will benefit from the missing CCTV?” he said. “Is it not those who will be incriminated? Because that could be put up as a defense by the CIDG team if they release the video.”

He also said Aguirre vowed to speed up the preliminary investigation of the DOJ into the NBI murder complaint against Marcos and his men.

He added that the DOJ had set the hearing for Dec. 20.

Lacson said he would report out his committee’s findings and recommendations next month when Congress resumes its session. /ATM