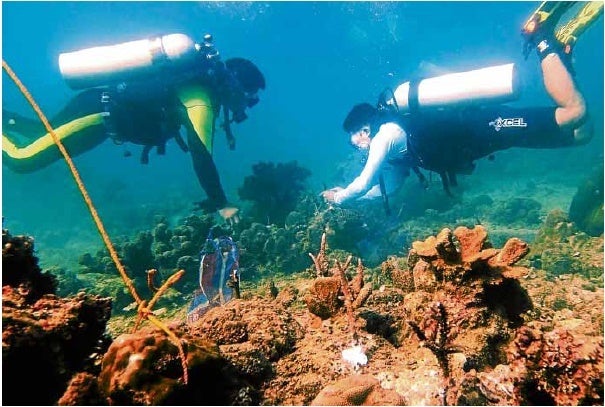 Divers work 20 feet in the waters off Hundred Islands to transplant corals and revive the reef.

For more than an hour, the deep waters were a portrait of an efficient assembly line: one diver, using a steel brush, scrubbed the  rocks, while another hammered on nails. A third diver planted a coral fragment beside the nails, aided by a fourth diver who fastened it to the nails using a zip tie.

Then the final touch: the diver glued the coral fragment to the rock to ensure it stayed in place, using Pioneer epoxy clay.

This sequence followed coral restoration technology, said Virna Salac, national coordinator of the Department of Science and Technology’s coral restoration program. The detached coral fragments were gathered from the reef and grown in coral nurseries in shallow portions of the HINP.

Corals are invertebrate animals which form into colonies we know as coral reefs. These reefs are vital marine ecosystems where water animals rely on food and shelter. But climate change and human activity have been damaging major reefs, even in the Philippines.

Pioneer Adhesives Foundation Inc. sponsored the environmental rehabilitation project in the city through “Reef Fix,” a coral restoration program. The project was co-sponsored by the Alaminos City government, the DOST and the Pangasinan State University.

When the divers surfaced, they had transplanted 2,500 coral fragments off the Camantiles, Sison and the Mayor’s islands.

Retired police officer Manuel Velasco was able to transplant around 100 fragments and said he was happy to have contributed to their rehabilitation.

To cover a larger underwater area, the divers were grouped into five teams. Each team was assigned a quadrant spanning 90 square meters, said Martina Spakowski, executive director of the Pioneer Adhesives Foundation Inc.

Spakowski said they were supposed to transplant 5,000 coral fragments, but organizers decided to cut the target in half as it could be risky to send 50 divers under the sea at one time.

“But we will return in January to transplant the remaining 2,500 fragments to fulfill our promise to the city,” she said.

The HINP is home to 27,000 surviving coral fragments, mostly Acropora branching species that were planted two years ago through an earlier program sponsored by DOST, PSU and the city government.

Salac said the new plantation would be turned over to the city government in February next year.

On Dec. 14, about a thousand volunteers planted mangrove seedlings at the coastal city’s mangrove areas as part of coral reef protection. The mangrove forests act as a shield that prevents sediment from flowing into the water where corals are propagating.

The volunteers were comprised of teachers, students, local government officials and employees, members of non-government organizations and church workers.