The BRT: Almost 30 years in the making

It was 1989 when inventor and investment banker Francis Yuseco Jr. conceptualized, designed and copyrighted the original idea for a bus rapid transit. A series of unfortunate economic events, however, forced it back on the shelf
By: Roger Pe - @inquirerdotnet
Philippine Daily Inquirer / 01:12 AM December 18, 2016 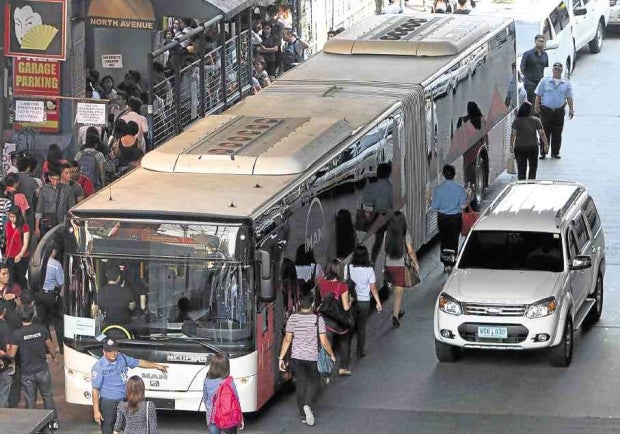 HYBRID BUS-TRAIN The Department of Science and Technology unveiled the Hybrid Electric Road Train meant to solve the mass transit problem. The 40-meter vehicle runs from 40 to 50 kilometers per hour and carries up to 60 passengers per coach. —PHOTOS BY RICHARD REYES/LYN RILLON

Almost 30 years ago, a Filipino inventor and investment banker conceived of a mass transport system very similar to the BRT, or bus rapid transit, being proposed in Metro Manila.

But a series of economic downturns, the steep decline in the peso-dollar exchange rate, and the lack of access to information on similar and existing transit models in other countries that made the system difficult to visualize, led to the idea withering on the vine.

The locally made transit system was meant to liberate the country from the clutches of its dependence on foreign loans and technology.

Yuseco proposed to install the PRT along the wide and unoccupied middle islands of Edsa based on the results of an exhaustive study conducted by the University of the Philippines Transport Training Center (UPTTC, now the National Center for Transport Studies).

The study concluded that instead of the then proposed Edsa MRT plus the 6,000 buses plying Edsa, a Philtrak consortium could reduce the buses to only 92 units, each one traveling at an average speed of 48 kilometers per hour, with headways of 15 seconds and dwell times of 20 seconds.

A headway is a measurement of the minimum possible distance or time between vehicles in a transit system.

Dwell time, meanwhile, refers to the time that a vehicle spends at a scheduled stop, either to load or unload passengers, or wait for traffic ahead to clear. 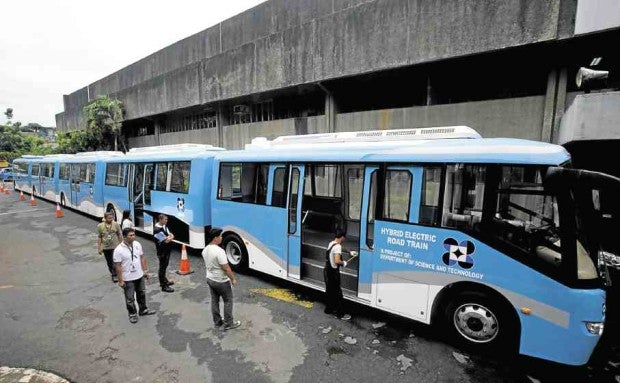 HYBRID BUS-TRAIN The Department of Science and Technology unveiled the Hybrid Electric Road Train meant to solve the mass transit problem. The 40-meter vehicle runs from 40 to 50 kilometers per hour and carries up to 60 passengers per coach. —PHOTOS BY RICHARD REYES/LYN RILLON

Dwell time is a common measure of efficiency in public transport, with shorter dwell times seen as being universally desirable.

Yuseco’s idea would have cost P2.2 billion today. In contrast, the government-approved Edsa BRT for the same distance would cost P14.4 billion.

The investment banker said the proposed P37.8-billion 48-km Edsa BRT and the P10.6-billion 23-km Cebu BRT defeat the purpose and essence of a rapid transit system, as the proposed BRT would entail enormous foreign loans and perpetual subsidy from taxpayers.

In 1989, Yuseco recalled how traumatized the economy was by the collapse of export-oriented, dollar-earning and publicly listed top companies in the Philippines.

These companies availed themselves of foreign-denominated loans from a major investment bank where he was a partner and executive director.

On paper, Yuseco said, “these foreign currency loans were soft and concessional with less than 1 percent interest a year. The moratoriums on principal were pegged at 7 to 10 years, while maturities were as long as 30 to 40 years. To further sweeten them, these loans were usually accompanied by so-called aid.”

The loans were always made to appear as assistance to help develop weak economies of import-dependent countries, the banker said.

However, “(all) overseas development assistance and other export credit facilities demand that the source of raw materials, finished goods, spare parts, maintenance and even consultants should be the countries extending these so-called soft loans,”  he added.

When local companies availed themselves of these loans, the exchange rate was P7.80 to one US dollar.  During the same period, the government availed itself of a basket of foreign loans from Belgium for the first Light Rail Transit. 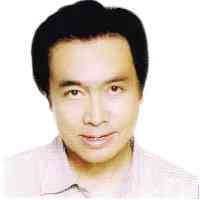 Five years after, the exchange rate deteriorated to P15 for every $1. After another five years, it plummeted to P36 to $1. Thus, the effective interest rates of the so-called soft loans were over 300 percent a year.

It might have to do with the attractive commissions offered by various suppliers tied up to these foreign technologies, he added.

Yuseco’s idea, had it been implemented, would have meant that the coaches of the buses used would be manufactured in the Philippines, together with its centralized contactless ticketing system.

Then UPTTC Deputy Director Esteban Cases called Yuseco’s Philtrak idea the “bus train,” with its 92 articulated buses able to transport more than a million passengers a day. This would mean that the roads of the metro could have been decongested by up to 94 percent, with less physical space occupied by conventional buses and jeepneys.

Yuseco said the proposed Edsa BRT along the innermost lanes of Edsa would occupy as many as 4 lanes altogether, while an at-grade PRT occupying only one outermost lane per direction of Edsa would be more doable and practical.

Likewise, a fully elevated Edsa PRT would cost P12.5 billion, single lanes per direction running at 50 km, with “turnaround” ramps at SM Mall of Asia in Pasay City and the Monumento roundabout in Caloocan.

The cost would cover construction of two elevated tracks and about 96 buses serving 1,054,000 passengers a day. The elevated tracks could also be built on top of the two opposite sidewalks, which are government-owned, that could serve as shed and shelter for people walking along Edsa.

Yuseco said each bus would be air-conditioned, could carry 180 to 200 passengers, and would charge rates similar to those charged by ordinary buses on Edsa today. Passengers were also expected to wait no more than a minute to catch their next ride in stations dotting the PRT line.

So why did it take the Philippines such a long time to warm to the BRT idea despite Yuseco’s patent?

In 1989, there were no search engines yet for people in the Philippines to know and appreciate a similar system—the Rede Integrada de Transporte—already operating in Curitiba, Brazil. Then Transportation Secretary Oscar M. Orbos turned down the PRT proposal for “being merely theoretical, unproven, and with a limited systems capacity.”

On Oct. 15, 1997, a historic event occurred in the country’s mass transport industry. For the first time, the Philippine government recognized and respected the Filipinos’ intellectual property rights and awarded the design, installation, construction and operation of the indigenous mass transit system to an all-Filipino consortium on two major corridors of Metro Manila—the C5 corridor and Commonwealth Avenue.

However, because of the 1997 Asian financial crisis, the project failed to launch.

On Aug. 31, 1999, the American Bus Association admitted in a facsimile letter to Philtrak the Philippine influence on the US reinvention of the bus service. Then US Federal Transit Administrator Gordon Linton called their reinvented bus service as the bus rapid transit.

With the United States instead of Filipinos now taking the lead, the BRT was accepted and is now operating in 180 cities in 39 major countries.

How soon can the same transport system be put up  in the Philippines?

First, President Duterte must give unconditional support to the full development of the country’s indigenous mass transit system. The Department of Science and Technology recently announced that it was ready for a longer haul testing of the country’s very own manufactured railways systems.

While tests are ongoing, the Philippines’ own trackways systems can be put in place as early as September 2017. No doubt, the two working and operating in tandem, using Filipino engineers, local materials, finished products, spare parts, labor and domestic financial markets will free the country from the clutches of onerous foreign loans and technologies.

With the Philippine Constitution, Republic Act No. 8293, the Intellectual Property Code of the Philippines, and RA No. 7459, or the Inventors and Inventions Incentives Act that obligate Filipino citizens to give protection, priority and use to all duly registered Philippine copyrights and patents, Philtrak’s One Operating System can be implemented and applied to all bus operators who can join the consortium even without congressional emergency powers.

Transportation Secretary Arthur Tugade followed suit by offering to the Philtrak consortium the opportunity to explore the possibility of replacing LRT-1 with the Filipino-made PRT. After due evaluation, Philtrak politely declined Tugade’s offer.

Now Batangas Gov. Hermilando Mandanas is again giving the all-Filipino consortium the opportunity to showcase what Filipinos can do./rga