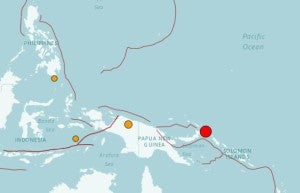 Location of a power quake that hit near Papua New Guinea on Saturday, Dec. 17, 2016 (Map from the US GEOLOGICAL SURVEY)

SYDNEY — A powerful earthquake struck off the coast of the Pacific island nation of Papua New Guinea on Saturday, and a tsunami threat was issued to areas near the epicenter. There were no immediate reports of injuries or damage.

The magnitude-7.9 quake struck 46 kilometers (29 miles) east of Taron in Papua New Guinea, the US Geological Survey said. The quake was deep, at 103 kilometers (61 miles). Deeper earthquakes tend to cause less damage than shallow ones.

The USGS initially said the quake’s magnitude was 8.0, but later downgraded the strength.

The Pacific Tsunami Warning Center said there was a threat of a tsunami in Papua New Guinea and nearby areas. It said tsunami waves reaching 1-3 meters high were possible along the coasts of Papua New Guinea, while waves in other areas, including the Solomon Islands, would likely be less than 0.3 meter (1 foot) high.

The quake rattled residents near the epicenter on the island of New Ireland, but was not felt in Papua New Guinea’s capital, Port Moresby, said Mathew Moihoi, an official with the Geophysical Observatory. There were no immediate reports of damage, though officials were still assessing the situation, he said.

Papua New Guinea sits on the Ring of Fire, the arc of seismic faults around the Pacific Ocean where earthquakes are common.