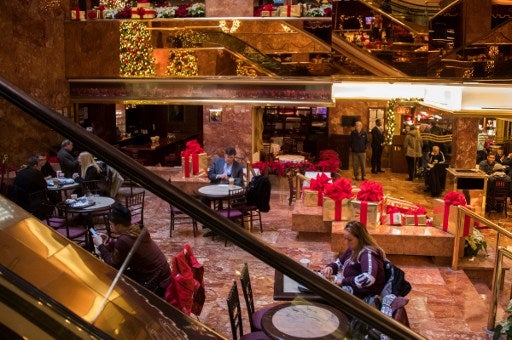 The Trump Tower Grille is viewed at Trump Tower in New York on December 15, 2016.
A sneering restaurant review savaging a bistro in the lobby of his New York headquarters and casting aspersions on what it might mean for his presidency provoked another of Donald Trump’s infamous Twitter broadsides on December 15, 2016. “Trump Grill Could Be The Worst Restaurant In America,” screamed the headline on the Vanity Fair online article, sub-headlined: “And it reveals everything you need to know about our next president.” The incoming Republican president, who has been at loggerheads with the magazine’s editor Graydon Carter for decades, was not impressed. AFP PHOTO

NEW YORK—Vanity Fair has had the last laugh after President-elect Donald Trump blasted the magazine over a snooty review of one of his restaurants: its subscription numbers have broken a company record.

“Has anyone looked at the really poor numbers of @VanityFair Magazine?” the incoming Republican commander-in-chief asked his 17.4 million followers on Twitter bright and early Thursday.

“Way down, big trouble, dead! Graydon Carter, no talent, will be out!” he added for good measure in reference to the magazine’s editor, with whom he has a feud dating back decades.

Only it seems that offending the 70-year-old billionaire real estate tycoon is good for business — at least in the news industry.

READ: Trump is Time magazine’s Person of the Year

A magazine spokeswoman said Vanity Fair that day collected the highest number of subscriptions sold in a single day for any Conde Nast company publication, clocking up 13,000 new subscriptions in a single 24-hour period.

The magazine has added a banner to its website, calling itself the “magazine Trump doesn’t want you to read” and encouraging readers to subscribe.

The offending restaurant review, written by reporter Tina Nguyen, summed up a recent lunch at a bistro in Trump Tower lobby as “rich-man slop” under the headline “Trump Grill Could Be The Worst Restaurant in America.”

Folio Magazine quoted Conde Nast as saying the article received one million unique views since Trump’s tweet, which did not link to the review.

Other print media have similarly seen an uptick in business since the vitriolic US presidential campaign and shock election of Trump, who inflamed the country by insulting myriad population groups.

The New York Times has announced an exceptional surge in digital subscriptions, adding more than 200,000 net subscribers since late September.

The newspaper was among several media outlets attacked by Trump during his presidential race. It launched a series of investigations that revealed his reported tax loss of more than $900 million.

Vanity Fair followed up the restaurant review by writing a critical article examining the ambition and missteps of Trump’s daughter Ivanka, who is reportedly considering a role in the White House.