Pilloried Dutchman is Galera’s man of the hour 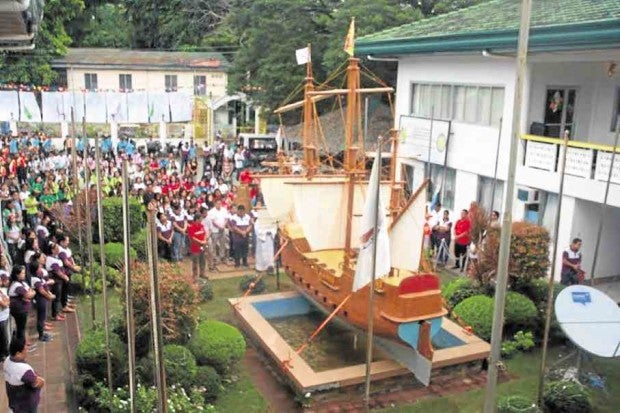 NEWEST LANDMARKOfficials of the resort town of Puerto Galera in Oriental Mindoro unveil a replica of a Spanish galleon at the municipal hall grounds. Puerto Galera, which celebrated its 89th founding anniversary on Dec. 7, is an ancient trading port. —CONTRIBUTED PHOTO

Dutchman Kees Koornstra was declared an undesirable alien by public officials of Puerto Galera in Oriental Mindoro province last year for commenting about the garbage problem in the resort town. Suddenly, this month, he is the man of the hour after he built a replica of a galleon, now officially recognized as a public landmark.

Almost everyone in Puerto Galera is giving Koornstra, 63, a former sailor, a pat on the back since the local government unveiled the galleon on Dec. 7, in time for the 89th founding anniversary of Oriental Mindoro’s tourist capital.

Puerto Galera, which lies on the northeastern coast of Mindoro Island, was once a thriving trade port, providing safe anchorage for sea vessels during a storm. In Spanish, its name means “Port of the Galleons.”

Koornstra was tapped by Mayor Rockey Ilagan to build the galleon right in the middle of the government compound. It took him six weeks to build the replica that was made of steel frame and concrete and painted timber brown.

The government spent around P30,000, which went mostly to buying materials.

The Dutchman used to own a boatyard in The Netherlands and had spent years traveling in his yacht until he settled in the Philippines with his Filipina partner in 2000. Last year, he built himself a home with walls made of sandbags and equipped with solar panels and rain catchment facilities.

In 2015, the municipal council issued a resolution declaring Koornstra persona non grata after he posted on Facebook a photograph of garbage piling up on the street in White Beach, one of the popular but often congested tourist destinations in Puerto Galera. “Puerto Basura” (port of trash), he captioned his post.

“I don’t really care [about the persona non grata declaration] anymore since [it happened] during the administration of the former mayor,” Koornstra said in a phone interview. “I’m not bitter about it, [but] I fight back this way,” he said.

Records from the municipal tourism office showed that 224,873 people visited Puerto Galera from January to October this year. Like Koornstra, several foreigners have chosen stay on the island.

The galleon replica is the first historical landmark in the town. Local officials plan to build a 25-meter long, walk-in galleon museum next year at Muelle port.

Koornstra has been tapped again to install a more detailed replica of the Spanish vessel.

He said building things is his hobby, but he is glad that the community allows expatriates, like him, to get involved.

“I feel more like a Galeran now,” he said. ”What I can do for the town is what’s more important.”