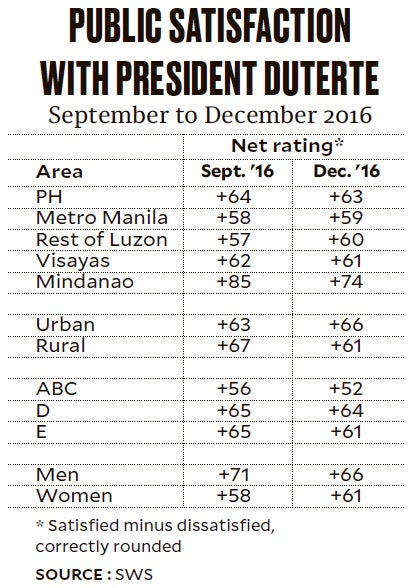 An 11-point drop in President Duterte’s satisfaction rating in Mindanao, his bailiwick where poverty is highest, means the country’s main problem is not drugs but how to improve the lives of the poor.

That was the takeaway of Akbayan Rep. Tomasito Villarin following the release of the results of the latest Social Weather Stations (SWS) survey showing that Mr. Duterte continued to enjoy a “very good” though slightly dipping satisfaction rating nationwide.

“If this is not addressed, I think next year, Mindanao will reject President Duterte,” the lawmaker said.

The SWS survey, conducted from Dec. 3 to 6 and first published in BusinessWorld, showed that while Mindanao still gave the President the highest rating of “excellent,” his net satisfaction there went down to +74 in December from +85 in September.

Net satisfaction on the island though is still higher than those in other areas.

Nationwide, SWS found that 77 percent of the respondents were satisfied with Mr. Duterte’s performance, 13 percent were dissatisfied and 10 percent were undecided, resulting in a net score (satisfied minus dissatisfied) of +63 from +64 in September.

SWS interviewed 1,500 respondents nationwide, composed of 600 in Luzon outside the metropolis and 300 each in Metro Manila, the Visayas and Mindanao. The survey had a margin of error of plus-or-minus 3 percentage points for national percentages.

Malacañang had a different reading of the survey results, focusing on the President’s ratings nationwide. It expressed gratitude to the public for giving the President a “very good” net satisfaction rating.

“(This) will serve as an inspiration for (the President) to redouble his energy to be true to his oath of office and fulfill his promise of getting rid of drugs, crime and corruption in our society,” Andanar said.

“This is a wake-up call to him. He should be rethinking his policies, especially extrajudicial killings, because our poorest people are really affected, especially those in depressed areas,” he said of Mr. Duterte.

Erice said this was a big challenge facing the President. “He has to change the system,” he said.

Abdulrashid Ladayo Sr., a member of the pro-Duterte Kilusang Pagbabago, said the 11-point drop in satisfaction rating in Mindanao could be due to followers who were drawn into the Duterte bandwagon during the last phase of campaign.

“These people are not necessarily apolitical given that their decision to support Duterte could be largely attributed to the influence of peers and the bombardment of political ads. They are not the typical discerning voters who made use of issues as basis for choosing their presidential bets,” Ladayo said.

Wildon Barros of Kilusang Mayo Uno-Northern Mindanao attributed the decline to Mr. Duterte’s changing stance on issues like the release of political prisoners, the end to contractualization that has become selective and his pledge to institute a national minimum wage.

“That’s the pattern. Later on, the number (of dissatisfied) would increase if people get fed up with unfulfilled promises, such as improving the economy. The people have expected a lot and if that expectation was not met, the rating would further dip,” Mapano said. —WITH REPORTS FROM DJ YAP, ANA ROA, JEANNETTE I. ANDRADE, MARLON RAMOS AND JIGGER JERUSALEM/rga