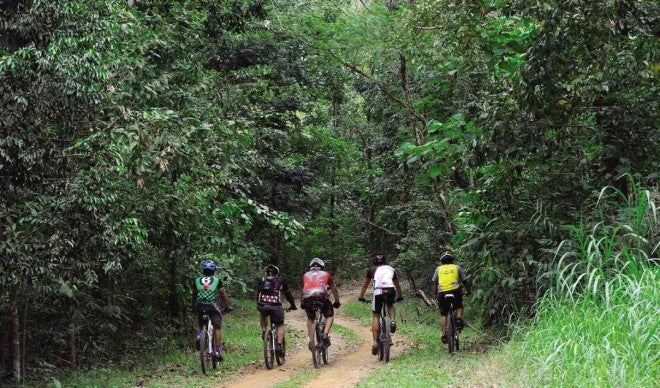 GREEN ESCAPE. Nature lovers seeking relief away—but not too far—from Metro Manila’s concrete jungle reap the rewards of a multisectoral effort to protect and nurture the La Mesa watershed, which has been made lush by some 750,000 trees and gradually cleared of informal settlers. AFP

MANILA — The Department of Environment and Natural Resources has cancelled the environmental compliance certificate of property developer Century Communities Corp., which is seeking to put up a 58-hectare housing project at the La Mesa Watershed.

This was in line with Environment Secretary Gina Lopez’s pronouncement on Thursday that the DENR decided to “adopt social justice at its very core, as the fulcrum of all its endeavors.”

In a briefing, Lopez cited a scientific recommendation against converting the area into a housing project for the employees of the Metropolitan Waterworks and Sewerage System (MWSS).

“It is not advisable to put up any kind of development inside the La Mesa Watershed,” Lopez said. “As a matter of principle, that’s the watershed of 12 million people, and I cannot see the possibility that a business interest is more important than the water our people drink.”

“You MUST not have housing inside a watershed because it will affect the water table,” she exclaimed.

According to the Invest Philippines website, an ECC is a document issued by the DENR certifying that a possibly high-impact project would not cause significant negative environmental impact.

The ECC contains specific measures and conditions that a project proponent has to undertake before and during operations.

DENR Undersecretary for Legal Affairs Maria Paz “Ipat” Luna explained some of the conditions under the ECC were not fulfilled, as of the latest communications with the Century Communities.

She said a required hydrological study was not carried out because the team was not allowed inside, which meant that condition “might not be fulfilled at all.”

“Hence, there is a condition rendering the ECC ineffective. So, why keep the ECC alive when they could not fulfill the condition? It is up to us and we are constrained not to give the tree-cutting permit anyway,” she said.

Luna also stressed that the DENR’s move was legal. “It can be cancelled, it can be suspended, it can be changed because it is only a planning tool,” she said.

Since construction of the project has not even begun, Luna noted that the DENR has actually lessened the company’s exposure by telling the company early on that “we cannot grant a tree-cutting permit.”

Century Communities is a subsidiary of listed Century Properties Group, Inc., which was founded by businessman Jose E.B. Antonio, whom President Rodrigo Duterte recently named as a special envoy to the United States.

Lopez maintained: “I said DENR is committed to social justice and the filter in which all decisions are made is based on the common good. If you’re going to ask me to make decisions based on political scenarios, I’m not going to do that.”

On the request of the Philippine Daily Inquirer, the Century Communities Corporation emailed a response to the news, saying the company “would like to wait for the DENR order first before releasing a statement.”

As background, the CCC said Lopez first announced that their ECC would be suspended last October during a press conference.  The CCC said it had not received any written order on the suspension since then.

The CCC said that prior to that, a technical conference between CCC and DENR was held last September.  CCC claimed that the DENR neither sanctioned nor fined CCC, but validated CCC’s compliance.

“A few weeks later in October, suspension was announced. No papers came and then the December press conference took place this afternoon.  As such, we would like to wait for the formal paper first before issuing any further comments,” read the emailed reaction of the CCC on Thursday (Dec. 15, 2016).

Its October 2016 statement read as follows:

“Century Communities Corporation is of the strong opinion that there is no definitive basis to suspend its ECC for the said project. On September 6, 2016, a technical conference was held between DENR officers and our company representatives to discuss our responses to the agency’s Notice of Adverse Findings, which required us to show cause why we should not be fined. There was no mention of the possibility of suspension, nor cancellation.

“Further, the said meeting established that the company complied with the ECC rules and as a result, was neither sanctioned nor fined by the DENR.

“Further, the company is of the strong opinion that suspension is not warranted since there has been no development works commenced on the property to date.

“The subject property is located some two and a half kilometers away from the reservoir. It was awarded through a sale by the MWSS to its employees for a housing project. These private rights to the develop a housing project in the property was upheld with finality by the Supreme Court in 1975.

“Century Communities expresses its hopes that the DENR would fairly and judiciously exercise its authority throughout the course of this process not only for the project, but also recognize that the property has been afforded the rights to develop a housing project.

“Projects in Singapore, the United States and the United Kingdom that are built beside water reservoirs have been proven not to contaminate the water with the use of stringent measures.

“Our company believes that with the right planning and execution, and the proper guidance from the DENR, there is no reason that the same cannot be achieved for the Novaliches development.

“Finally, our company remains open to discuss with the DENR and the various sectors on whatever conditions or additional requirements will be imposed on the project to further safeguard public interest.”  SFM