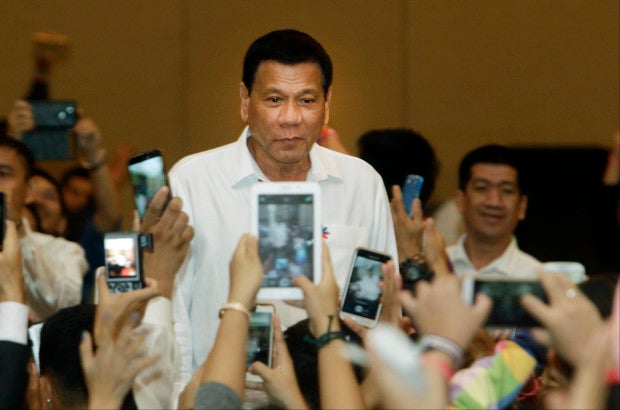 The SWS poll, conducted from Dec. 3 to 6 with 1,500 respondents, showed that President scored a +63 net satisfaction, down by just one point during the survey last September.

In a statement, Presidential Communications Secretary Martin Andanar said the survey reflected the people’s “continuous strong support for the President and his administration” amid the spiralling drugs killings in the country.

“(This) will serve as an inspiration for (the President) to redouble his energy to be true to his oath of office and fulfill his promise of getting rid of drugs, crime and corruption in our society,” Andanar said.

He also sought the indulgence of the public regarding Mr. Duterte’s use of expletives, saying they were “not personal attacks directed at particular persons, but mere expressions of disgust and impatience.”

“The President knows very well that the many problems faced by the nation, including grinding poverty, inadequate social services, persistent armed rebellion and terrorism, cannot be solved overnight,” he said.

“But he is doing his best to address all these and hopes that the Filipino people would support him all the way as unity and firm resolve are what we need to move forward as a nation,” he added.  SFM/rga