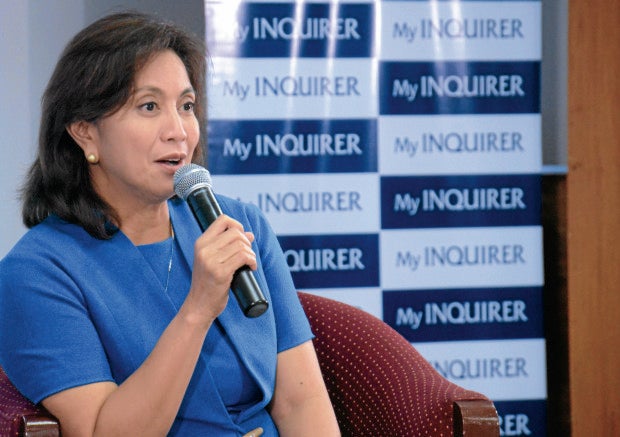 Vice President Leni Robredo said on Wednesday she was not amused by President Duterte’s joke that she better pray for his plane to crash so she could succeed him.

She said she would not wish her late husband’s tragic fate upon anyone else.

Robredo is the widow of former Interior Secretary Jesse Robredo, whose small plane crashed in waters off Masbate in August 2012.

She said she remains supportive of the President even after quitting the Cabinet and emerging as the new voice of the opposition.

“I am his Vice President but he is President. What we only want is for our voices to be heard whenever we oppose his policies, but this does not mean we want something bad to happen to him,” she said in Filipino at a student’s forum in Cavite.

A transcript of her remarks was sent to reporters.

She said she was offended by the President’s statement, which implied she could not wait to get her hands on the presidency.

“I did not laugh at his joke in Bukidnon when he said I was praying for his plane to crash. I lost my husband in a plane crash. That is not a joke,” she said.

Responding to reports and speculations about the state of the President’s health, Robredo said Mr. Duterte should take care of himself as the person with the mandate to lead the country.

“I think it is a matter of national interest that we know what he is going through. We wish that whatever illness he may have, that he overcomes it. He is the one we elected to lead us. Our President needs to be strong,” she said.

Speaking to Filipino and foreign businessmen late on Monday, Mr. Duterte, 72, disclosed he was taking a powerful analgesic normally prescribed for cancer patients to relieve pain in his spine. He said his doctor told him he was already “abusing the drug.”

He also said he is suffering from Buerger’s disease, a constriction of blood vessels caused by accumulation of nicotine.