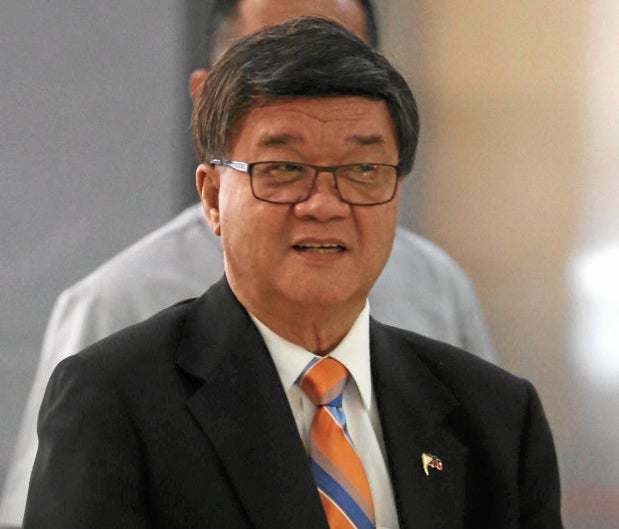 Citing loss of trust, Justice Secretary Vitaliano Aguirre II on Wednesday axed the acting intelligence chief, Charles Calima Jr., and his assistant, Edward Chan, as part of a purge at the Bureau of Immigration (BI) in the wake of a bribery scandal involving fugitive gaming tycoon Jack Lam.

Aguirre, who appointed Calima to his post, did not give any specific reason for firing the former police senior superintendent and Chan, an active police superintendent, in his termination letter.

He refused to make any prejudgment on who was guilty in the scandal because he would ultimately decide on the findings of the probe being conducted by the BI and National Bureau of Investigation.

‘We have to do this’

“If the investigation later on would exonerate them and they would like to apply to go back. Then at least there is basis. In the meantime, because of the gravity of the accusations, we have to to do this,” Aguirre said.

But in an interview with reporters, the justice secretary said he lost trust in Calima and Chan for their alleged involvement in the P50-million bribery based on Argosino and Robles’ claim that the immigration intelligence chief had recorded the transaction and blackmailed them for P18 million, which was taken from the total amount.

Aguirre said Calima committed a criminal act by recording, as claimed by Sombero, the alleged bribery.

“That kind of recording is a violation of the Anti-Wiretapping Act. That is not admissible as evidence in court and mere possession is a criminal act,” he added.

He said Calima had wanted to meet with him to discuss reports that he had lost confidence in the latter due to reports of shady transactions in the immigration bureau. But the meeting did not push through as it had been overtaken by events, he added.

The justice secretary said he had warned Sombero against talking to Calima in solving Lam’s woes.

Aguirre said he also lost trust in both Argosino and Robles whom Sombero and Calima accused of extortion, but that he could only recommend their termination because it was the President who appointed the associate commissioners

He said he could not work with the two anymore because he considered their relationship “fractured.”

Two lawyers of the Department of Justice (DOJ)—Estanislao R. Canta and Jose Carlitos Licas—were appointed officers in charge of Argosino and Robles’ departments during their 30-day self-imposed leave of absence from Dec. 12, 2106 to Jan. 11, 2017, pending the President’s decision on Aguirre’s recommendation to fire them.

“An act of impropriety or the appearance of an impropriety on the part of an officer or employee erodes the public’s trust and tarnishes the office occupied by the erring individual,” Aguirre said.

“More so in cases of officials whose offices are held in trust and confidence of the appointing authority. The separation of an erring official is made more apparent with the loss of such trust and confidence due to their failure to perform their respective duties,” Aguirre said in a Dec. 13 letter to Executive Secretary Salvador Medialdea and Presidential Management Staff Chief Bong Go.

Aguirre said the bribery scandal was a major setback as it reinforced the public perception that the BI was the most corrupt government agency next only to the Bureau of Customs.

He said he thought of purging the old guard at the BI and reassigning them to far-flung provinces to rid the BI of its bad apples.

While he was willing to continue with his work, he said he would not lose sleep if the President would decide to replace him, too. “I am challenging our deputy for special prosecutors to hand in our resignation papers at the same time,” Aguirre said.

He said he wanted Lam to come back to the country to face the music. Previously, he claimed that Lam, through Sombero, had attempted to bribe him to be his “ninong” or protector.

Aguirre declined the offer of money and he suggested that Lam pay what was due the government, get a license for online gaming and stop hiring illegal Chinese workers.

Read Next
4 transport groups seek P1 jeepney fare hike
EDITORS' PICK
UK’s Boris Johnson will resign, BBC reports
Unemployment rate up to 6% in May
Geek out at TOYCON 2022 powered by Smart Signature
High inflation: Your P1 is now worth only 87 centavos
High-risk pregnancy: Reducing your risk is in your hands
House energy committee chair Arroyo bats for cheap electricity
MOST READ
Suspect in grisly killing of missing woman in Bulacan arrested
Kim Atienza’s daughter flaunts bikini body in response to critics of her ‘revealing photos’
Japanese artist who created ‘Yu-Gi-Oh!’ found dead in the sea
FDA probes popular Filipino noodle brand for ‘high level of ethylene oxide’
Don't miss out on the latest news and information.