Duterte: I may not finish my term | Inquirer News
Close
menu
search

Duterte: I may not finish my term 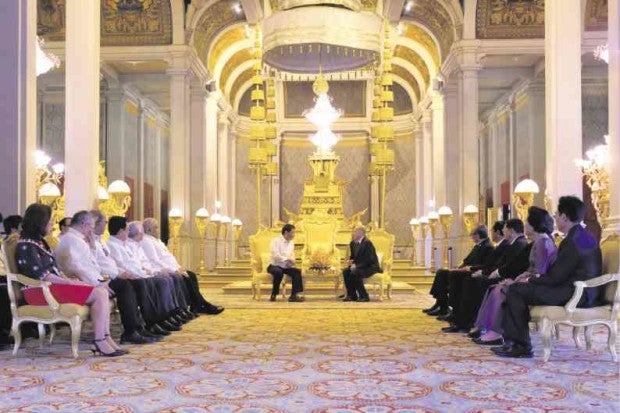 PHNOM PENH—The realization hit him six months into his presidency: He doesn’t need the job.

“I am old,” President Duterte told a cheering crowd of several thousand expatriate Filipinos in the Cambodian capital Phnom Penh on his arrival for a two-day visit.

Mr. Duterte, who will be 77 when his six-year term expires in 2022, is the oldest person to be elected President in the Philippines.

He added that he had “found out very late” that he did not need the presidency at his age.

“It’s not a question of having regrets, none at all, because I entered into it,” he said.

“I realize now—I do not need it at this time of my life. But I tell you, I take pleasure at the end of the day, that’s the only consolation, I have a job, I am doing something right,” he added.

He does not need “confirmation,” he stressed, before adding that the “yellows,” referring to the previous Aquino administration and its Liberal Party members, want him out of his post because they cannot accept defeat.

But the Reds, or the Left, would not allow him to be unseated.

“The Left will kill you if you remove me. Because I am leftist. I am the child of poor parents. I’m the first left-leaning President. But I am not under or I am not a member of the Communist Party of the Philippines,” he said.

Mr. Duterte told business leaders in Manila on Monday that he had no fear of being removed from power or assassinated because of the killings in his antidrug campaign.

Since July 1, nearly 6,000 people have died in the crackdown, a key plank of Mr. Duterte’s May election campaign. Police say 2,028 have been killed by officers in self-defense, and the rest “deaths under investigation.”

“Oust me—good; assassinate me—better; I have this migraine every day,” he said. “I have a lot of issues with my spine. What I have is really Buerger’s disease. It’s an acquired thing that you get from smoking, because of nicotine.”

Doctors had advised surgery on his spine, he said, but his wife, a nurse who used to work in the United States, did not agree because “a lot of operations for the spine went wrong.”

He added: “If you guys see me always in a sad mood, I am actually pushing a nerve here to relieve the pain,” and touched the right side of his face.

Any aches and pains he may experience are just par for the course for someone his age, said the President’s spokesperson, Ernesto Abella.

Asked about suggestions that the Palace issue medical bulletins, Abella insisted that Mr. Duterte was OK, days after the President himself detailed his physical ailments.

“Based on results, he’s doing very, very well,” he said.

Labor Secretary Silvestre Bello III, a member  of the President’s official delegation to Cambodia, said a medical bulletin on Mr. Dutere’s condition was not that necessary.

“What you see is what you get. If you see the President going on leave because he cannot do his job anymore, then you can have some doubts about his health,” said Bello.

Only if he begins having difficulty meeting his obligations would a health bulletin be necessary, he said. “He is superhealthy. I don’t understand where he gets his energy,” he said.

Bello also brushed off speculations that Mr. Duterte’s condition was worse than what was publicly admitted.

“What he is doing cannot be done by someone who is sick,” he said.

Before flying to Cambodia, the President attended late night engagements.

“Whatever pains he’s experiencing, the doctors would say basically wear and tear. It’s part of the territory,” Abella said.

Earlier this month, Mr. Duterte talked about his health problems, which include daily migraines and pain in his spine.

He disclosed that he was taking the powerful painkiller Fentanyl, used by cancer patients.

But he denied that he was suffering from cancer, a rumor that arose during the campaign.

Fentanyl is a prescription drug similar to morphine but is 50 to 100 times more potent.

Side effects include nausea, vomiting, confusion, hallucination and seizures.

The two leaders known for their tough-guy approach to governing witnessed the signing of four agreements on transnational crime, sports cooperation, tourism and labor cooperation.

The Philippine and Cambodian police will address drug trafficking, terrorism, extremism, and financial and economic crimes.

Montero earlier said Cambodia had an interest in vocational training, pointing out the Philippines had a high level of expertise in this area.

Before his departure from Manila, Mr. Duterte said his trip to the Philippines’ neighbors—he will go to Singapore after Cambodia—was in preparation for the Asean summit meeting which the Philippines would host late next year.  —WITH REPORTS FROM MARLON RAMOS AND THE WIRES