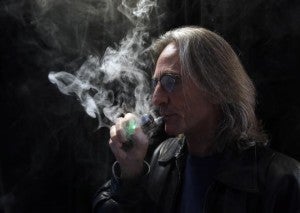 MINEOLA, New York — The popularity of e-cigarettes has been accompanied by a climbing number explosions or fires in the decade since their debut.

The devices simulate tobacco smoking. Because they operate on lithium batteries, they appear to be suffering mishaps similar to some smartphones, hover boards and other products.

This year alone a teenager at a Florida amusement park was burned. A man was chatting with co-workers in New York’s Grand Central Terminal when his pants erupted in flames. And a Brooklyn boy was partially blinded.

The Food and Drug Administration started regulating the devices in May. It is reporting increasing numbers of injuries in the past 18 months from exploding e-cigarettes. –Frank Eltman/AP