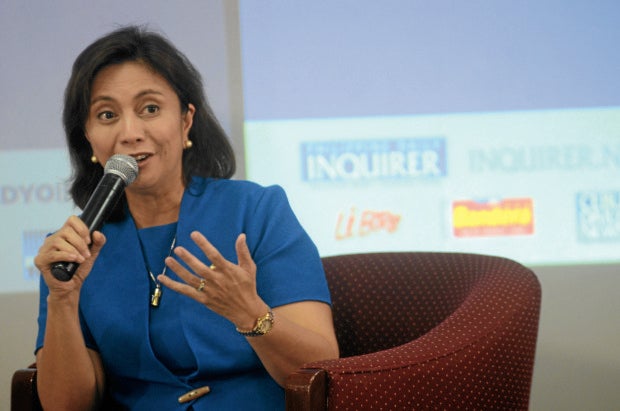 MANILA — Vice President Leni Robredo said on Wednesday that the Liberal Party (LP) has been working to set a meeting of its members with former President Benigno Aquino III in January, two months earlier than scheduled, to consolidate its forces as the voice of the opposition.

Robredo, the LP’s interim chair, made a distinction between being the “opposition leader” and the “voice of the opposition,” saying she would rather be the latter as that transcended political party lines.

Speaking at a student forum in Cavite, a transcript of which was sent to reporters, Robredo said the LP’s interim president, Sen. Francis Pangilinan, has been the one organizing the party-wide meeting with Aquino and other party leaders, including the LP’s defeated presidential candidate, former Interior Secretary Mar Roxas.

“In the previous timetable, we were supposed to call a meeting in March, but I suggested that we do it earlier,” she said.

Robredo said she sought an earlier meeting so the LP members could discuss and arrive at a party stand on various issues, including pending measures on the restoration of the death penalty, the lowering of criminal responsibility, and amendments to the sin tax law.

“They [party leaders] are suggesting that we meet so we can create a policy body so that the members can understand [the issues] — for example, federalism. That’s why they are saying we should discuss this before these are deliberated in Congress, so we have direction,” she said.

On the point of LP possibly emerging as an opposition party, she said she preferred that she and the party played the role of the voice of the opposition.

“This is not only the voice of the LP as the opposition but the unification of the voices dissenting against some policies of the government that we believe are threatening our democratic institutions,” Robredo said.

She said nonpartisan opposition to specific policy issues would be better than opposing all the policies of government merely for the sake of opposing them.