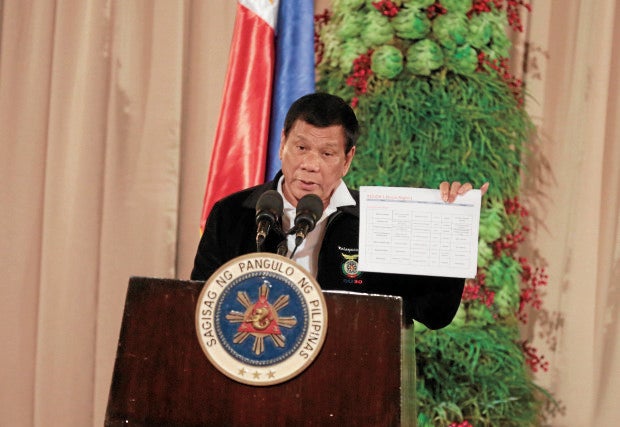 Voting 17-2 with one abstention, the Senate on Wednesday ratified the bicameral report on the proposed P3.350-trillion national budget for 2017.

The two senators who voted against the ratification of the report were Senators Panfilo Lacson and Sherwin Gatchalian. Senate Majority Leader Vicente “Tito” Sotto III abstained from voting.

Lacson said he voted against the ratification because of the continuing presence of “pork barrel” allocations in the budget bill, among others.

“With a heavy heart and much hesitation, I am voting against the ratification of the bicameral conference committee report on the 2017 national budget,” he said.

“I do so for various reasons, the most compelling of which is the continuing presence of pork barrel allocations in the 2017 general appropriations bill yet to be enrolled for the President’s approval.”

“Save for the P3.6 billion that still remains in the DPWH budget and divided among the 8 legislative districts of the ARMM, after we transferred the P8.3 billion to the SUCs, I need not provide the details of the other pork allocations,” he said.

DPWH is Department of Public Works and Highways, ARMM is Autonomous Region in Muslim Mindanao, while SUCs stands for state universities and colleges.

During Tuesday’s bicameral committee hearing, the House of Representatives gave in to Lacson’s proposal to remove the P8.3 billion from the DPWH, which was originally allotted to the ARMM.

The House also agreed with the Senate’s proposal to just transfer the fund to the SUCs.

But Lacson seemed not satisfied by the amendment, noting the P3.6 billion that still remains in the DPWH budget, which will also go to the ARMM.

“Suffice it to say, Mr. President, I know pork when I see it; when I hear about it; even when I smell it—in the lounge, right in my office, and elsewhere, during informal discussions and casual conversations with some of our colleagues and congressmen even,” he said.

“Please rest be assured I do not intend to be indifferent, or be different, nor am I being contumacious in this regard. Having said that, I have long been unflinching in this fight, advocacy if you will, against pork in the budget since I earned the title the Honorable Senator from Cavite and the Republic of the Philippines,” the senator added.

On Tuesday, the House of Representatives also ratified the bicameral report. Once ratified by both chambers of Congress, the budget measure will now be transmitted to the President for signature.

Senator Loren Legarda, chair of the Senate committee on finance, earlier said that the President will sign the budget bill on December 22. RAM