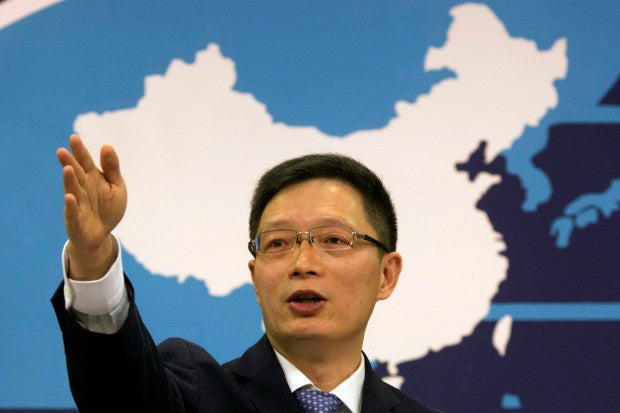 Taiwan Affairs Office spokesman An Fengshan signals for questions from a journalist at a routine press conference in Beijing, China, Wednesday, Dec. 14, 2016. China says any change in U.S. policy favoring formal recognition of Taiwan will “seriously” damage peace and stability in the Taiwan Strait and undermine relations between Beijing and Washington. AP

BEIJING, China — Any change in U.S. policy favoring formal recognition of Taiwan will “seriously” damage peace and stability across the Taiwan Strait and undermine relations between Beijing and Washington, a Chinese government spokesman said Wednesday.

The comments from the Cabinet’s Taiwan Affairs Office follow President-elect Donald Trump’s remarks over the weekend that he didn’t feel “bound by a one-China policy” unless the U.S. could gain benefits from China in trade and other areas.

Under the one-China policy, the U.S. recognizes Beijing as China’s government and maintains only unofficial relations with Taiwan, a former Japanese colony which broke from the Chinese mainland amid civil in 1949.

Spokesman An Fengshan said breaching the one-China principle “will seriously affect peace and stability across the Taiwan Strait.”

“The one-China policy is an important political foundation for relations between China and the U.S.,” An told reporters. “If such a foundation is disturbed or undermined, there can be no talk of a healthy and stable development of U.S-China relations.”

Trump broke diplomatic precedent by talking on the phone with Taiwanese President Tsai Ing-wen on Dec. 2, during which the island’s leader congratulated Trump on his election victory. Then, this past weekend, Trump said he might use America’s recognition of Beijing as leverage for gaining advantages in trade and other areas.

Spokesman An Fengshan said breaching the one-China principle “will seriously affect peace and stability across the Taiwan Strait.”

That is placing him perilously close to touching on China’s bottom line that brooks no formal recognition of Taiwan or challenge to its claim to sovereignty over the island. China’s response has thus far been fairly muted, mainly blaming Tsai for placing the call.

The last major crisis over Taiwan came in 1995, when China staged threatening war games and missile tests near the island in response to then-president Lee Teng-hui’s visit to the U.S., which was seen by Beijing as a bid to solidify the island’s de-facto independent status. The move was largely seen as backfiring, with Lee winning the island’s first direct presidential election in 1996.

Washington responded by putting two aircraft carrier battle groups on alert, one of which crossed the Taiwan Strait, although China’s vast strides in military power in the years since would likely complicate such a move in the current era.

The U.S. and China are the world’s two largest economies with bilateral trade in goods and services reaching nearly $660 billion last year.

Although the U.S. does not challenge China’s claim to sovereignty over Taiwan, Washington remains Taiwan’s main source of weapons, with $14 billion in approved arms sales since 2009, and is bound by law to consider threats to the island’s security a matter of “grave concern.” CBB