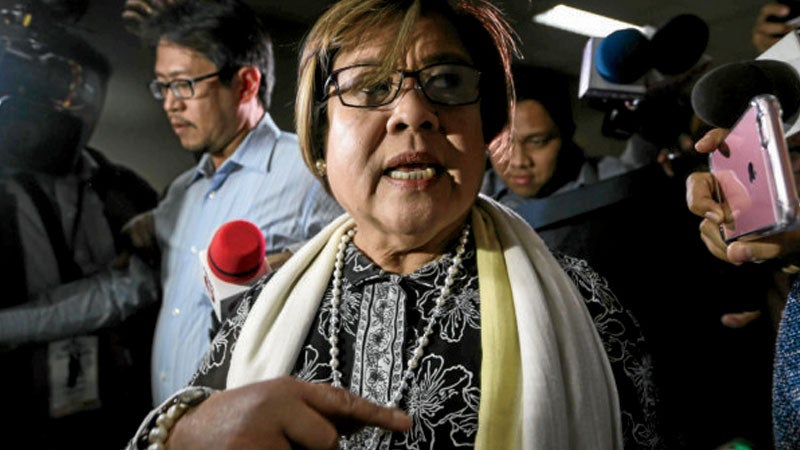 This is the second case in two days filed against De Lima by Alvarez, Umali and Majority Leader Rodolfo Fariñas after they went to the Senate on Monday to file an ethics complaint.

De Lima has been an outspoken critic of the surge of extrajudicial killings unleashed by President Duterte’s war on drugs.

She led a Senate inquiry into the killings but senators loyal to the president ousted her from the leadership of the Senate committee conducting the inquiry.

“As an incumbent senator, former secretary of justice and a lawyer, advising and inducing Mr. Dayan to hide and not to attend or appear in the House inquiry for which he was duly summoned is tantamount to inducing disobedience to summons issued by Congress of which she is a sitting member,” said the House leaders in their complaint.

Justice Secretary Vitaliano Aguirre II received the complaint personally and assured that the DOJ would treat the case as just a regular case amid De Lima’s claims he was biased against her for allegedly making up the drug charges to destroy her reputation. He said he would assign a single prosecutor to De Lima’s case.

Umali clarified public perception that the House was ganging up on De Lima with two back-to-back cases filed in two different courts.

The House leaders noted that De Lima was invited four times to attend the hearings held in September and October this year.
But the senator did not only attend, the House leaders said she even branded the House committee as a kangaroo court and its hearings a sham.

But the House leaders said they did not punish De Lima in consideration of interchamber courtesy.

The House issued a subpoena against Dayan in Sept. 26 to compel him to answer charges by DOJ witnesses that he received bribes from drug lords and delivered the money to De Lima.

When he finally appeared at the House last Nov. 24 after hiding in a remote mountaintop for weeks, Dayan revealed that De Lima had advised him through his daughter, Hanna Mae Dayan, not to appear in the House probe because they would just make a fool of their relationship and that this was just part of the plan of House leaders to destroy her.