Whales in the wild: rare gem amid Thailand mass tourism 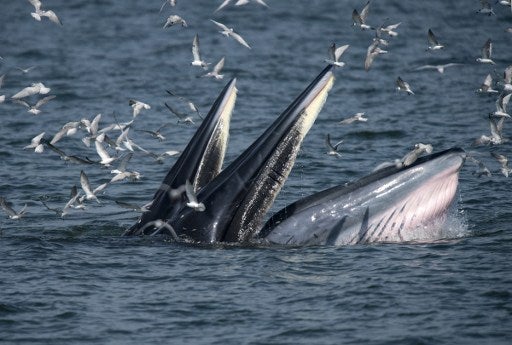 This picture taken on November 20, 2016 shows a mother Bryde’s whale (front) and her calf feeding on anchovies in the Gulf of Thailand, off the coast of Samut Sakhon province. AFP PHOTO

GULF OF THAILAND, Thailand — Piercing the water’s surface with its almond-shaped mouth, a giant Bryde’s whale opens wide for one, two, three seconds, gulping in anchovies as a boatload of awed tourist look on in the Gulf of Thailand.

It’s a rare glimpse of marine life in its natural habitat, in a kingdom overrun with mass tourist attractions such as aquariums and dolphin shows.

Once a dream for scuba divers, many of Thailand’s coral reefs have been dulled by pollution, over-fishing and increased boat traffic, as well as over-enthusiastic swimmers.

But going out to spot Bryde’s whales is a relatively new concept.

The 15-meter (50-foot) long mammals flock to the northern Gulf waters to feed on an abundance of anchovies during the September to December rainy season.

Many tourists come out to catch a glimpse of their unique feeding habits — observing the way they keep their mouths agape for seconds at a time.

“The way they eat is the greatest biomechanical event” in the world, said Jirayu Ekkul, who takes groups out on his converted fishing boat to spot the whales just a few hours from the bustling capital Bangkok.

The devoted diver and wildlife photographer’s company Wild Encounter Thailand is among only a handful offering whale watching excursions in the Gulf of Thailand.

Heading out on the waters in search of Bryde’s whales is a ritual he relishes, and one he hopes won’t be lost if whale-watching goes the way of so many other mass tourism attractions in Thailand.

“Commercial whale-watching is new in Thailand, there are no regulations yet,” he tells AFP on his boat, which can carry about 40 people.

Ekkul insists he is careful: Last year he took out fewer than 1,000 tourists, he says, and his operation adheres to strict international guidelines for this kind of venture.

Boats are expected to slow down near the whales, keep a good distance, and to make sure they do not block their paths.

“This boat has the right way to approach them, by slowing down the engine, slowing down the boat speed,” said Surasak Thongsukdee, a whale specialist at the Marine and Coastal Research Center (MCRC).

Surasak and other researchers often join the tourist expeditions, a key opportunity to observe the 50 or so Bryde’s whales in the Gulf — all of which he knows by name.

Whale-watching has become a significant global industry. The number of people taking such trips grew from 4 million in the 1990s to 13 million by 2008, according to the International Fund for Animal Welfare.

But there are concerns about the impact it has. In 2014 conservationists at the International Marine Conservation Congress warned tourist boats may be causing stress and driving whales from their natural feeding grounds. There is also the risk of death from collision with the vessels.

In the Gulf of Thailand, six whales were found dead this year, which is a sharp spike from the average one death per annum. Surasak blames this increase on the toxic waters, though local media also reported illegal fishing trawlers in the area.

“These whales might be affected by pollution flowing into the water” he said, adding that many different rivers flow into the Gulf of Thailand. In October, dozens of sting ray and razor clam beds died off due to pollution from one tributary.

The junta-ruled kingdom, whose sputtering economy remains hugely reliant on tourists to keep afloat, has come under fire for letting visitors spoil its natural attractions.

Precious coral are routinely damaged by throngs of scuba-diving tourists, who scrape reefs with their fins or hands in their hunt to spot tropical fish. Some even pose on the coral to take underwater selfies.

He would like to see Thailand embrace green tourism, an increasingly attractive industry among eco-minded travelers.

In collaboration with the UN, he founded Green Fins, a program that promotes sustainable diving and snorkeling in Asia to protect coral reefs, and would like to see a more eco-friendly ethos applied in Thailand.

“It makes economic sense to be green now,” he said.