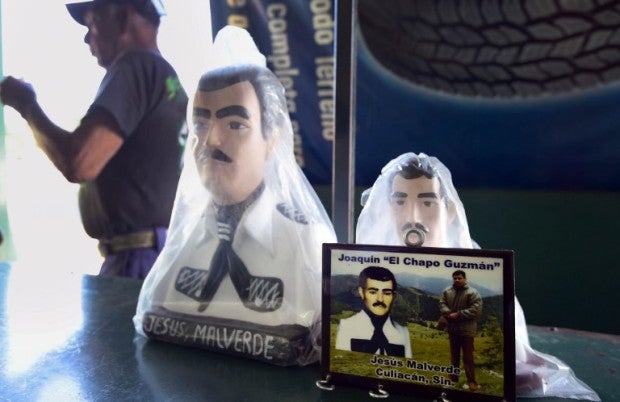 View of a picture depicting Mexican drug lord Joaquin Guzman aka “El Chapo” and narco-saint Jesus Malverde, who according to legend was a Robin Hood-type bandit who stole from the rich and gave to the poor, at a store next to the Malverde chapel in Culiacan, Sinaloa state in northwest Mexico, on December 7, 2016. On December 11, 2016 Mexico marked 10 years since the government began to deploy troops in a drug war that has killed tens of thousands of people, with many victims buried unceremoniously in mass graves, dumped on roadsides or left hanging on bridges. AFP

Ten years after Mexican troops were unleashed against drug cartels, the country will mark the anniversary without fanfare on Sunday, with murders rising again and the military eager to return to barracks.

President Enrique Pena Nieto, who inherited the drug war when he took office in December 2012, has promised his countrymen and women a “Mexico in peace.”

His government has created a new federal police force and imprisoned or killed several drug kingpins, but Pena Nieto has kept troops on the ground despite allegations of abuses and criticism from human rights groups.

The administration has no events planned to commemorate the controversial deployment that was launched by his predecessor, Felipe Calderon, on December 11, 2006.

Ten days after taking office, Calderon deployed some 5,000 troops to his western home state of Michoacan—the start of a militarized campaign against drug trafficking.

The figure dropped in the first two years of Pena Nieto’s presidency, only to rise again in 2015.

Although murders remain well under the worst years of Calderon’s presidency, there were 17,063 homicides in the first 10 months of 2016, already surpassing last year’s 12-month total of 17,034.

Much of the bloodshed is blamed on ultra-violent turf wars between drug gangs.

But the weakening of major drug cartels such as the Beltran Leyva, Zetas, Gulf and Knights Templar has led to the emergence of smaller gangs that seek to diversify their business through kidnappings and extortion.

“The war has become much more complex. The level of death has escalated,” Raul Benitez Manaut, a security expert at the National Autonomous University of Mexico, told AFP.

The drug cartels have terrorized the population by leaving the decapitated bodies of their rivals on roadsides or hanging them on bridges, while mass graves are regularly found in the countryside.

Police have been accused of colluding with criminals while soldiers and marines have faced allegations of committing torture, extrajudicial killings and sexual abuse.

Even Defense Minister Salvador Cienfuegos agrees that troops do not belong in a law enforcement role.

“We didn’t ask to be here. We don’t like it. We didn’t study how to chase criminals,” Cienfuegos said on Thursday.

He said he would be the first to raise “not one, but two hands” in favor of returning troops to barracks.

“Our function is something else and it’s been made into something unnatural. We are doing things that don’t correspond to our training because there’s no one else to do them,” the minister said.

Though Pena Nieto acknowledged on Friday that the armed forces were doing tasks that “don’t correspond to them in the strictest sense,” he insisted that they are “determined to continue” policing the streets.

And federal police in Jalisco state Friday arrested Jesus Beltran Guzman — a son of one of the Beltran Leyva cartel’s founders and a nephew of  “El Chapo” — in a drug bust, authorities said.

But Javier Oliva, a Mexican security expert at the London School of Economics, said “there is no strategy” and the troops are always one step behind.

Drug consumption in the United States, meanwhile, has not ceased and the legalization of marijuana in several US states has prompted drug cartels to step up production of heroin while synthetic drugs proliferate.

In Mexico, civilians have paid a heavy price for the international drug trade.

In 2010, 72 Latin American migrants were slaughtered by the Zetas drug cartel in the northeastern state of Tamaulipas after they refused to be recruited by the gang.

In 2014, 43 students were abducted by corrupt police in the southern opium poppy-producing state of Guerrero.

Authorities initially said the officers handed the students to the Guerreros Unidos drug cartel, which killed them, but independent experts have questioned that conclusion, leaving the mysterious case open.

The 43 young men have become a symbol of the 28,000 people who have vanished in Mexico in the past decade.

“The stories are terrible. We no longer know where the state starts and crime ends,” said Javier Sicilia, a poet-turned-activist who founded the Movement for Peace and Justice after his son was murdered in 2011.

Sicilia, who led peace caravans across Mexico and the United States, has lost faith in the government.

“We want them to step aside,” he said. “There’s nothing to ask to the state. It must be changed, refounded,” he said.

A monument was built in Mexico City in honor of the victims of violence — a series of rusted metal slabs featuring quotes from famous writers.

“It’s an insult to the victims,” Sicilia said. “It’s the monument to the common grave. There are no names, no stories.” TVJ/rga