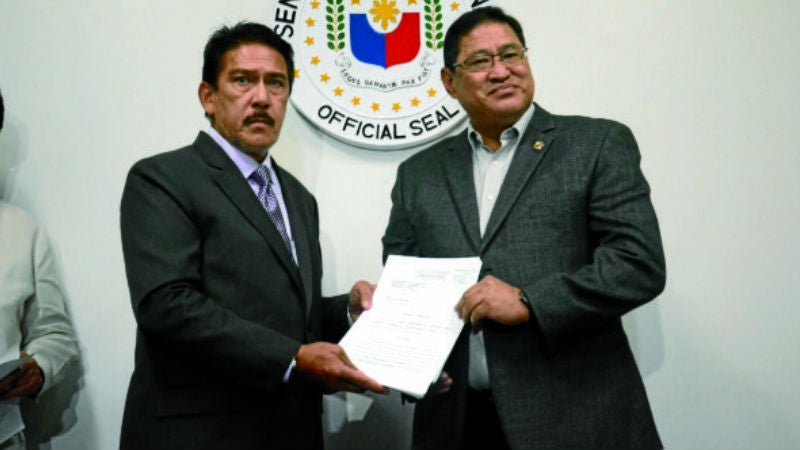 Leaders of the House of Representatives on Monday filed a third complaint against Sen. Leila de Lima in the Senate, accusing her of disrespecting the House.

The latest ethics complaint stemmed from De Lima’s advice to her former bodyguard and lover, Ronnie Dayan, not to appear at a House inquiry into allegations that he was her bagman in collecting protection money from convicted drug lords serving their sentences in New Bilibid Prison (NBP) when she was the justice secretary.

Should the Senate ethics committee decide to hear the latest complaint, the hearings will start only after Congress returns from its holiday break on Jan. 15, according to Senate Majority Leader Vicente Sotto II.

The House complaint is the third ethics case to be brought against De Lima.

She is already facing two complaints for allegedly coddling drug lords, based on testimony of NBP inmates at the congressional investigation of the illegal drug trade inside the national penitentiary.

De Lima left for the United States and Germany on Sunday.

Umali submitted the complaints to Sotto, chair of the Senate ethics committee, as well as to committee members Senators Panfilo Lacson and Gregorio Honasan II.

Umali said De Lima “disrespected” the House through her behavior.

“We will leave it to the sound discretion of the Senate. This is now our response to the interchamber courtesy that we would like to give courtesy to the Senate to take action to the complaint of the House,” he said.

Asked whether the House could enter into a compromise with De Lima, Umali asked how a compromise could be reached when the senator had not recognized the proceedings on the House justice committee.

Sotto assured Umali that his committee would “take the proper action.”

The senator told reporters that he would review the complaint and then send copies to committee members. The panel would then recommend whether to call hearings on the complaint.

And if the committee recommends hearings, Sotto said this would start next month because De Lima was not around to answer the accusations.

“I also don’t know if I can muster a quorum by next week. Everybody is in Christmas mode already so I would be the one to study what possible recommendations we will give,” he added.

Sotto also gave assurance that the committee would be impartial in its investigation.

Lacson said he believed the House complaint against De Lima was just a matter of determining the penalty that she would be facing for her action.

“I do not want to prejudge. But I think what is left for discussion is the penalty [to be imposed on De Lima] based on the evidence that has so far been presented,” he said.

Lacson pointed out that De Lima had admitted to advising Dayan not to appear at the House inquiry.

Read Next
CHR rallies students against death bill
EDITORS' PICK
10 Filipinos positive for COVID-19 in UK, 7 in Ireland — envoy
Nograles: Cabinet members to donate 75% of monthly salary to aid COVID-19 fight
Quick chat with Nicole Andersson: ‘You really don’t need much to be happy’
IATF to LGUs: Issue ordinances vs attacks on frontliners, COVID-19 patients
Diokno to Duterte: OK to make fun of buck tooth, but focus on people’s needs first
Robredo spox thanks Duterte for defending VP’s efforts vs COVID-19
MOST READ
Coronavirus hotbed Rizal to shut borders on April 6
Gov’t mulling quarantine period extension of 15-20 more days
ADB warns PH against prolonged lockdown
Sotto on Isko Moreno’s call: We do our job without the media following our every move
Don't miss out on the latest news and information.