Duterte:  I'm not a killer; I believe in God, in karma | Inquirer News
Close
menu
search

Duterte:  I’m not a killer; I believe in God, in karma 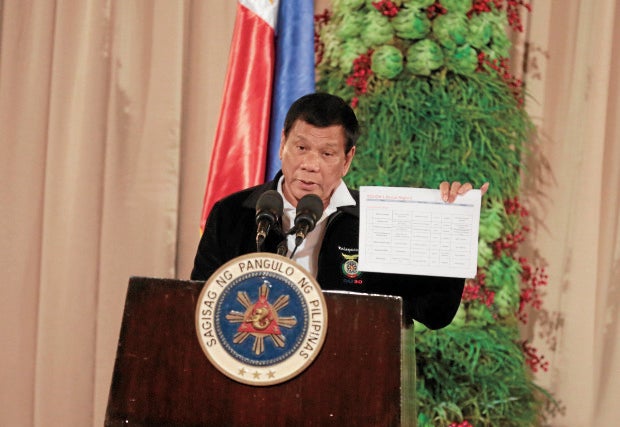 MANILA — President Rodrigo Duterte stressed on Monday, that he was not a “killer” to dispel the growing public perception, stoked further by a  viral New York Times article, which cast his administration in a bad light for the deaths of over 5,000 in just five months in office in line with his brutal war on drugs.

“I am not a killer. I do not relish or enjoy a Filipino sprawled there with all the blood,” said Mr. Duterte in a speech during The Outstanding Filipino Awards for 2016 in Malacañang.

“I do not want you to die, that is not my order,” said the President in response to criticisms that he abetted the extrajudicial killings of drug suspects with his advice to police not to hesitate to kill their targets if their life was in danger. But he refused to explain himself beyond these sweeping denials. “I leave it to you to sort it out (for yourselves), I can’t explain everything in this country, “said the President.

Although the public had dubbed him the “Punisher” and he said he was not a religious man, the President said he had a “deep faith in God” and that he believed in “karma.” He said that every time he approved the purchase of guns and bullets, he felt guilty knowing these would be used by Filipinos against Filipinos.

But he stressed he would not back off from his war against drugs despite the odds. “It is a harsh one but somebody has to be crucified for it, that is part of the territory,” said the President, referring to himself as the target of critics, political opposition and human rights advocates.

The President has sought the help of Speaker Pantaleon Alvarez, who engineered  the swift approval of the reimposition of the death penalty in the House of Representatives, because the drug problem has turned out to be more “horrifying, appalling” than he initially thought before he took over as president. “Even if Congress will give me carte blanche to kill everybody, I will not have the time nor the bullets to do it,” said the President. “I would like to get advice. What should I do? I really want to cry. I feel as if I can’t do it.”

He said he would not object if somebody asked him to release a longer list of protectors of drug lords that he has vetted several times in past few months. The President showed the audience a copy of the narco-list which he said had the names of 1,800 policemen, 700 barangay chairmen, city mayors, governors and a few congressmen.

The President also claimed that the Philippines became a narco-state much earlier than he had thought, and the infiltration of drugs in politics started about 15 to 17 years ago.  The President, in effect, revised his previous claim that the election this year of Sen. Leila de Lima, whom he has accused of pocketing drug money to finance her campaign, opened the portals of the government to drug lords.

He said the Philippines has become similar to Colombia, which has been controlled by the drug cartels for years.

Ilocos Norte Gov. Imee Marcos, the eldest child of the late dictator Ferdinand Marcos, was the President’s special guest in the audience and on stage even though she was not among the individuals honored in the event.