Duterte: Fewer people getting killed every day in drug war 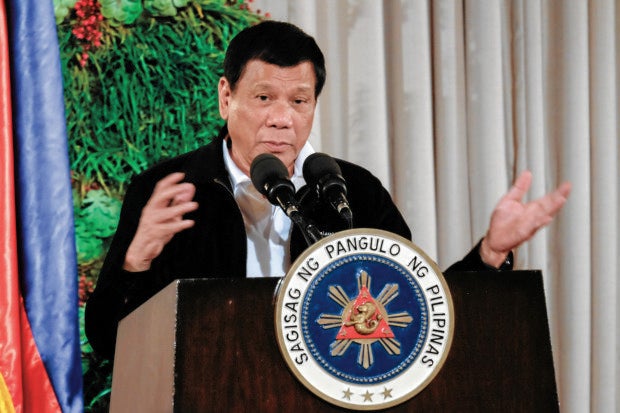 President Rodrigo Duterte on Monday said there were fewer people being killed now in relation to the administration’s war against drugs.

“Konti na lang ang namamatay. Medyo ubos na eh (Only a few are being killed. There are only a few left),” Duterte said during a speech in Malacañang. The audience laughed at his comment but he added, “Talaga. Hindi ako nagpapatawa (Really. I am not joking).”

Inquirer’s Kill List has a tally of 1,775 people killed since Duterte became president. The number includes victims of vigilante killings and suspects killed during police operations.

He said this after mentioning a supposed letter sent by Senator Richard “Dick” Gordon.

“Even a close friend [of] mine, Gordon, wrote me a very poignant letter. But I think, Dick, it’s too late in the game,” the President said, without elaborating.

Gordon is the head of the Senate committee on justice, which recently released its report claiming that there was no evidence to prove extrajudicial killings and the Davao Death Squad.

“My successor should be freed of this kind of malignancy,” Duterte said of the illegal drug trade in the Philippines.

Duterte gave his speech at the Rizal Hall in Malacañang where the awarding ceremonies for the Outstanding Men and Women of 2016 were being held.

The President reiterated his earlier statement that he does not find satisfaction in seeing people killed.

“I know that people are killed. It does not make me happy,” he said, adding that he also does not find satisfaction in ordering more weapons and bullets for the police, which will eventually be used in the drug war.

He claimed that there are now four million drug addicts in the country, something that he did not realize when he was still mayor of Davao City. He did not say where the figure came from.

“Kung hayaan mo lang ganun kasi ayaw mong pumatay (If you will allow it to continue because you don’t want to kill then), we are in a sorry state,” he said.

“That four million will contaminate another 10 million, then it will be too late for us to save the country. We will be like Latin America,” Duterte said.

He said he does not have any problem with priests who want to protect the sanctity of life.