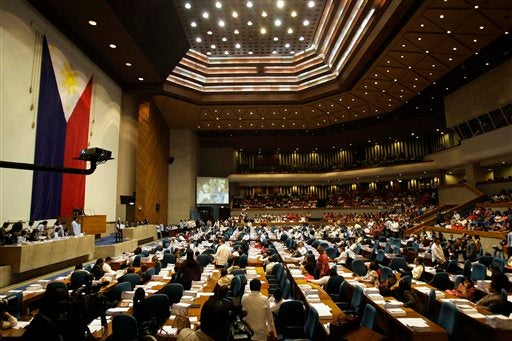 Congress is expected to pass the proposed P3.3 trillion national budget at the last minute or before it goes on a holiday recess on Wednesday.

Senators are hopeful that the impasse between the Senate and House panels reconciling the budget measure will be resolved in its meeting on Tuesday so that Congress could pass it by Wednesday.

Senate President Aquilino Pimentel III said in a text message on Sunday that in the Senate, “only the budget [measure] is expected to be passed in the remaining session days.”

Congress will adjourn on Wednesday and will return on Jan. 15 next year.

Majority Leader Vicente Sotto III said the bicameral conference reconciling the budget measure will meet on Tuesday and not on Monday as earlier planned.

In a phone interview, Sotto said the Senate panel will present to the House counterpart its proposal that aims to
resolve the main contentious issue in the budget talks.

The talks had been stalled over the House panel’s objection to the Senate proposal that removed the House version to cut P8.3 billion in funds from the budget of the Autonomous Region of Muslim Mindanao (ARMM) and transfer it to the budget of the Department of Public Works and Highways (DPWH).

It was Sen. Panfilo Lacson who found the House cuts and transfer of the funds, and pushed for its removal in the Senate version of the measure.
Outlawed practice

Lacson had said the DPWH will violate the ARMM’s Organic Act if it will be the one to implement the ARMM projects within the region.

Lacson also argued that the House cuts and fund transfer would revive the pork barrel days where lawmakers were allowed to implement projects. The Supreme Court had outlawed such practice for being unconstitutional in 2012.

Lacson had earlier said the eight ARMM congressmen were the ones who identified the projects worth P8.3 billion which they wanted the DPWH to implement. He said these congressmen were “being backed by the House leadership.”

Sotto on Sunday expressed hope that the House panel will agree with the Senate proposal not to remove the P8.3 billion but instead reallocate them to the State Universities and Colleges (SUCs) for subsidy/free education of poor but deserving students nationwide. The proposal was arrived at in an all-senator caucus last week.

Sotto said he also will add a provision that will earmark P300 million of the funds for scholarships for students studying medicine.

The P300 million will cover eight SUCs providing medicine courses, including the University of the Philippines, according to Sotto. “In this way, we will have more doctors,” he said.

Sotto said if the bicameral conference will be able to come into an agreement on Tuesday, then both the Senate and House could pass their respective budget measures on second and third readings on Wednesday.