Killed by a stray bullet 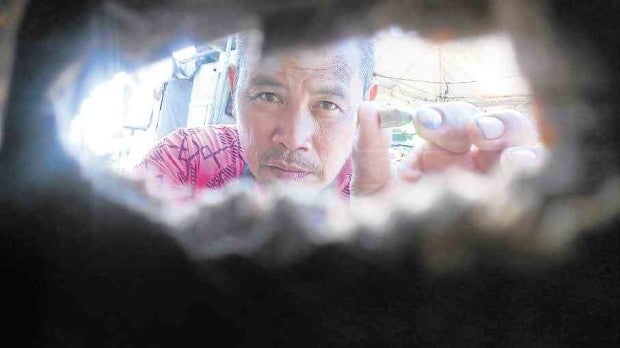 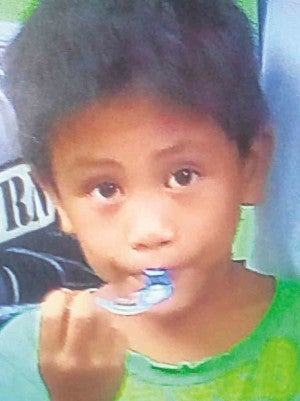 Village watchman Wilson Batucan (above) shows a slug that one of his sons found in their home in Concepcion town, Cebu province, after his youngest, San Niño was killed by a stray bullet fired by men chasing a drug suspect. —TONEE DESPOJO/CEBU DAILY NEWS

CEBU CITY—Seven-year-old San Niño Batucan was at home in the village of Cansaga in Consolacion town, northern Cebu watching TV when he suddenly felt pain in the stomach.

“Aray (Ouch)!” the boy shouted as he clutched his stomach, blood oozing out of it. Minutes later, he was lying lifeless in a hospital bed where his father, Wilson, 47, brought him.

It happened around 8 p.m. on Dec. 3 when gunshots were heard just outside the Batucan house. They were shots from a group of bonnet-wearing men who had been chasing a teenage boy accused of selling drugs.

Wilson, a village watchman, said San Nino was a victim of a “failed police operation.” Wilson said he believed his son was hit by a stray bullet.

Police, however, said there had been no antidrug operation in the community that night.

No bonnets for cops

Senior Insp. William Homoc, Consolacion police chief, said it would be easy to find out if police conducted an operation in any area because antidrug operations are always done in coordination with the Philippine Drug Enforcement Agency (PDEA).

“Besides, the suspects were wearing bonnets,” Homoc said. “I don’t allow policemen to wear those during operations,” he added.

Wilson said he suspected police to be involved “because they never came back to investigate.”

“They were looking for bullets but did not find any,” he said. “Why are we able to recover a bullet?” Wilson added, holding a slug that his other son found in their house.

Wilson had sought the help of the National Bureau of Investigation.

Homoc, however, said police are already investigating the case and have a strong lead. He did not elaborate.

“While we support the campaign against drugs, it should be done within the ambit of the law,” he said. “We feel that anything extrajudicial is not the best way to answer our problems,” the bishop added.

The 66-year-old prelate said one of the ways to address the drug problem is to strictly implement the law without killing suspects. “We call on the government to address crimes through other means, instead of killing criminals,” he said.

He said it is senseless for an innocent boy to get killed in the government’s war on drugs.

“An incident like this always makes us feel very sad,” he said.

“We begin to be concerned and afraid, knowing that so many have died,” he told reporters at the Cebu Metropolitan Cathedral on Tuesday.

Data from the police office of Central Visayas showed that 4,047 drug suspects had been arrested in the region from July 1 to Dec. 2 this year.

At least 146 suspects had been killed in supposed gunfights with policemen, while 205 others were gunned down by still unknown assailants.