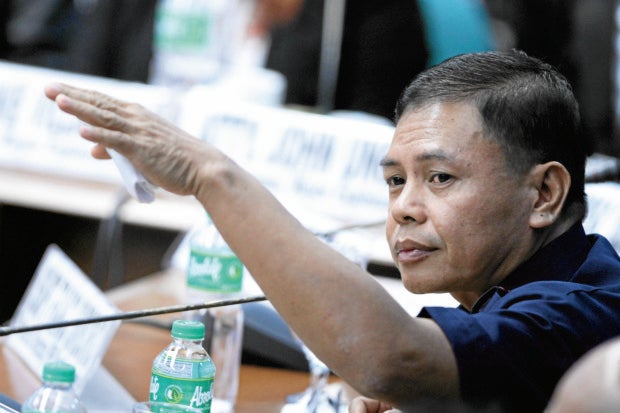 In this Nov. 23, 2016 file photo, Albuera Chief Jovie Espenido testifies during the joint hearing of the Senate Committee on Public Order and Dangerous Drugs and the Committee on Justice and Human Rights on the killing of Albuera, Leyte Mayor Rolando Espinosa Sr.  (INQUIRER PHOTO / RICHARD A. REYES)

TACLOBAN CITY, Leyte — Chief Insp. Jovie Espenido has been removed as police chief of Albuera town in Leyte and transferred to Ozamiz City, a month after he was accused by self-confessed drug lord Roland “Kerwin” Espinosa Jr. as the one who introduced him to Sen. Leila de Lima.

“I don’t know if this is reward or a punishment after what I have accomplished in Albuera,” he told the Philippine Daily Inquirer in a phone interview on Saturday night.  “But I am a police officer, so I have just to follow the order,” he added.

Espenido said he did not know the reason why he was relieved as Albuera police chief, a position he held since July 18.

He said he received the order on Dec. 6 and the order took effect two days later.

Espenido said he planned to meet with Chief Supt. Elmer Beltejar, director of the Police Regional Office in Eastern Visayas (PRO-8), on Monday before reporting to his new assignment in Ozamiz City.

“I really don’t know what will be my mission there. But I am looking forward to my new assignment as I have to obey the order from our director general,” he said.

Asked what could be the reason why he was removed from Albuera in the middle of his campaign against the illegal drugs, Espenido could not provide an explanation.

He said he suspected that some politicians might be behind his transfer to Ozamiz City.

“I guess, some of our politicians (may be responsible of my transfer),” he said, without naming names.

One of Espenido’s vocal critics was Ormoc City Mayor Richard Gomez who had accused the police officer of being a henchman of his political opponents.

When reached for comment, Gomez described Espenido as a “cry baby” for making such a statement.

“What a statement. Is he a crybaby? Ozamiz is a good place for him. There’s a big chance he will meet his match there,” Gomez said in a text message.

“He was not for anti-drugs in the first place. He has been playing politics all his police career,” the Ormoc mayor added.

Gomez was earlier identified in the affidavit purportedly executed by Mayor Espinosa as among those who received the money from his son, Kerwin.

The Ormoc mayor, however, vehemently denied the allegation, saying it was meant to destroy him politically.

He filed administrative cases against Espenido whom he accused of being close to the Codillas, a political clan considered as the political enemy of Gomez and his wife, Rep. Lucy Torres Gomez.

In a Senate inquiry on the death of his father inside the sub-provincial jail in Baybay City last Nov. 5, Kerwin claimed that the signature on the affidavit was not the mayor’s.

He cleared Gomez and instead accused Espenido as the one who introduced him to Senator De Lima’s former driver, Ronnie Dayan, who asked him to contribute to the then justice secretary’s campaign kitty.

Espenido had denied Kerwin’s claim and told senators that he was willing to issue a waiver to allow the National Telecommunications Commissions to open his call logs to check if he had indeed called Kerwin.

Espenido maintained that he had done a lot in Albuera in the six months that he was police chief compared to his predecessors.

“At least I was able to accomplish something. We were able to dismantle the drug operations of the Espinosa although the father was killed (inside the sub-provincial jail in Baybay) and Kerwin was arrested although he was not yet convicted of the charges we filed against him,” Espenido said.

Mayor Espinosa was killed inside his cell during a raid at the Leyte sub-provincial jail by members of the Eastern Visayas’ Criminal Investigation and Detection Group (CIDG) led by Supt. Marvin Marcos who claimed that it was a shootout.

Marcos was first relieved by Dela Rosa in October shortly after the arrest of Kerwin in Abu Dhabi and after the drug lord named Marcos as among the police officials who received payoffs from him.

But Dela Rosa said Marcos was reinstated on the same day on the intercession of a Palace official. President Duterte later admitted he was the one who ordered the reinstatement of Marcos.

Marcos, again, and the rest of the CIDG-8 operatives involved in the raid were relieved from their posts after the National Bureau of Investigation released its findings showing that Mayor Espinosa and another inmate, Raul Yap, were murdered by Marcos and his men. SFM