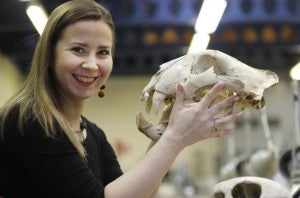 In this photo taken on Friday, Dec. 2, 2016, university lecturer Joanna Bagniewska looks at a tiger skull at the Zoology Department of the University of Reading in England. Like many foreign scientists in Britain, Joanna Bagniewska was devastated when Britons voted to leave the European Union. The biology lecturer, a Polish migrant who found Britain a welcoming place to build her academic career over a decade, is suddenly seeing her job security and research prospects up in the air. (Photo by FRANK AUGSTEIN/AP)

LONDON — Like many foreign scientists in Britain, Joanna Bagniewska was devastated when Britons voted to leave the European Union. The biology lecturer, a Polish migrant who found Britain a welcoming place to build her academic career over a decade, is suddenly seeing her job security and research prospects up in the air.

“I’m worried that after my current contract finishes, one of the prerequisites could be a permanent residence card,” she said. “I’d like to apply for EU grant money, but how much longer will it be available for?”

Britain’s top universities have long been among the world’s most sought-after destinations for study and research, drawing the brightest minds from all corners of the globe. But since Britons voted in June to leave the 28-nation EU, many in the science community say the UK risks losing the money, the international influence — and crucially, the talent — to sustain that enviable position.

More than one-tenth of research funding at British universities has come from the EU in recent years. Some fields — such as nanotechnology and cancer research — are more dependent on EU funding than others, according to a report by technology firm Digital Science. From 2007 to 2013, Britain received 8.8 billion euros ($9.4 billion) in direct EU investment in research.

Bagniewska is not just anxious about herself — she’s upset for her students’ future too, for the opportunities that both Britons and foreigners will likely miss out on when unfettered mobility between Britain and Europe can no longer be taken for granted.

“They were just getting excited about doing their masters and Ph.Ds in other countries. And then Brexit happened and they just got trampled,” she said.

Scientists and researchers argue that being part of the EU has given British science a huge boost because it allows Britain to recruit the best talent across Europe and take part in important research collaborations and student exchanges without being constrained by national boundaries. The bloc’s freedom of movement means its 500 million people can live and work visa-free in any member state.

No one knows yet what form Britain’s exit from the EU — commonly known as Brexit — is going to take, but immigration was a key issue for “Leave” voters. Many believe some limit should be put on the number of EU citizens moving to Britain.

Prime Minister Theresa May has vowed to reassert control over British borders. She has offered no firm guarantees for the rights of Europeans already living in Britain, an uncertainty that weighs heavily over the 32,000 Europeans who make up 16 percent of the academic workforce in British universities. Many universities say the rhetoric over immigration control is also jeopardizing recruitment of researchers and students from further afield.

Scientists for EU, an advocacy group, says it has received over 400 letters from researchers describing how Brexit has already impacted their life and work. Some are losing doctoral students who pulled out of studentships and job offers. Academics are putting plans to relocate to Britain on hold. One said their employer, a London university, immediately imposed a temporary hiring freeze, citing uncertainties about student recruitment and research income.

Adam Durrant, a British entrepreneur who founded an aerospace startup supplying climate data to airlines and aircraft manufacturers, says he’s now considering moving some of his business to a EU country outside of Britain. Part of the reason, he says, is that Brexit will likely make hiring the right people much harder than before.

“In the future, it probably means that people would be less interested to come to the UK to work,” said Durrant. “There’s a huge question mark over my company and my own personal future. I will certainly retain a UK presence, but my company’s focus of gravity may shift elsewhere.”

Scientists say some UK-based researchers are already being excluded from joint bids for EU funding to minimize the risks for their colleagues.

Paul Crowther, head of physics and astronomy at the University of Sheffield, said a researcher from his department was dropped from an EU grant proposal as a precaution following the Brexit referendum. The vote “put the UK-based researchers in a very awkward position” and their participation in EU-funded programs could “compromise the project,” he was told.

“The erosion of UK involvement in EU networks has already begun, with both the UK and EU science worse off,” Crowther said.

Apart from a loss of grant money, Brexit will likely cause British scientists and research centers to miss out on shared databases and infrastructure.

“Large-scale efforts like studies of rare genetic diseases, the building of large facilities, are areas that multinational collaborations do much better,” said Venki Ramakrishnan, a Nobel Prize-winning biologist and president of Britain’s prestigious Royal Society.

The EU is an important source of research funding for Britain, which lags behind many developed countries in state investment in science. In 2014, Britain’s government spent under 0.5 percent of its GDP on research — below the European average, and half that of South Korea.

May’s government is clearly aware of the jitters. She has promised to increase annual investment in research by 2 billion pounds ($2.4 billion) by 2020, in hopes her country can remain a world leader in science and innovation.

Durrant is doubtful that’s enough to make a big difference.

“Two billion a year spread across everything isn’t going to go very far,” he said.

Similar anxieties are being felt at the undergraduate level. The 125,000 European students studying at British universities now pay the same fees as locals and have access to the same government loans. Officials have promised this will not change for those applying next year — but no one knows what will happen after that.

Fewer European students appeared to be applying for some of Britain’s most competitive university courses, including medicine and places at Oxford and Cambridge. In September, the admission service UCAS reported a 9 percent drop in EU applications for British undergraduate courses starting in 2017.

Some argue that Britain could become like Switzerland, an “associate” EU state that is opting out of free movement of people while still taking part in limited European science projects.

“It’s not all doom and gloom — but it will be harder,” Ramakrishnan said. “We could make a go of it outside the EU. But for that to happen, we have to attract talent and fund science. And those two things are critical.” –Sylvia Hui/AP