Zenaida Luz case: ‘I lost my own defender’ | Inquirer News

Zenaida Luz case: ‘I lost my own defender’

The eldest in a brood of 13, Luz learned early on to shelter her siblings from family woes, including fights between their parents
By: Madonna Virola, Maricar Cinco - @inquirerdotnet
Philippine Daily Inquirer / 12:36 AM December 11, 2016 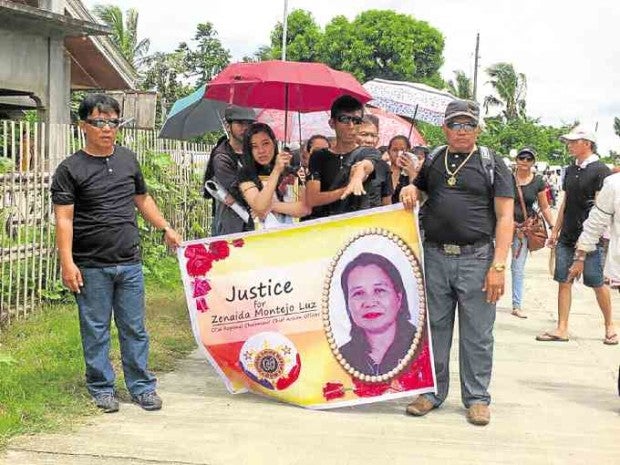 Colleagues and relatives of Zenaida Luz join the funeral procession for the anticrime crusader in the town of Gloria, Oriental Mindoro. CONTRIBUTED PHOTO

CALAPAN CITY—Anticrime crusader Zenaida Luz not only defended the poor and the weak in her community, but first and foremost, also protected her family.

When they were young, Luz’s parents often fought and ended up hurting each other. Being the eldest in a brood of 13, Luz grew up sheltering her siblings from her family’s woes.

“To protect us against the fighting at home, Ate would take us all to the farm and make us hide behind coconut trees,” recalled Perlita Alvarez, 48, Luz’s sister. “She would always tell us: don’t worry, I’ll find us a way out of poverty.”

Their parents, both fishermen in Oriental Mindoro province, could not afford to send the children to school, but Luz, who dreamt of becoming a lawyer, was persistent.

In high school, she worked as a store helper and made sure “she came home even late at night or else we would not have anything to eat,” Alvarez said.

Luz then moved to Marinduque province and worked as a house helper for relatives, who supported her through college.

“She was the smart one. She did not become a lawyer but she knew a lot from reading books about the law,” Alvarez said.

Instead, Luz became a teacher and taught high school for a while in Marinduque. She moved back to Oriental Mindoro, where she joined the Citizens Crime Watch (CCW), an anticrime civic organization, and headed its Mindoro, Marinduque, Romblon and Palawan (Mimaropa) chapter.

Luz, 51, was gunned down on Oct. 9 in front of her rented apartment that also served as CCW’s office in Barangay Maligaya in Gloria town, Oriental Mindoro. Her attackers were two pairs of motorcycle-riding gunmen, according to witnesses.

As the attack happened, policemen in Gloria were on their way to respond to a road accident nearby.

Alerted by the shooting incident, they instead ran after the fleeing gunmen. The first pair managed to escape but the second was cornered in Barangay Quinabigan in the next town of Pinamalayan.

A shootout ensued and just as the police approached the wounded gunmen, one of them screamed, “Tropa! Tropa (Troops)!”

They turned out to be Senior Insp. Magdaleno Pimentel Jr., then with the police’s Provincial Public Safety Company, and Insp. Markson Almeranez, then police chief of Socorro town. Police reports said Pimentel wore a ski mask, while Almeranez wore a woman’s wig.

That the gunmen turned out to be ranking police officers also caught the attention of the United Nations Office on Drugs and Crime.

Luz, a widow, left three adult children, the youngest of whom is 20 years old.

Alvarez said her sister would side with her, no matter what. “I lost my own defender,” she said.

“[Luz] was very vocal, especially when she believed she was right about something. I think she must have learned to become strong early in life,” Alvarez said.

But to Luz’s live-in-partner of five years and fellow CCW member, Richard Albert, Luz “was strong outside but very soft inside.”

On the night of the murder, Albert said Luz had been receiving text messages from someone claiming to be a drug pusher. The person said he needed CCW’s help to protect his wife and child.

Despite Albert’s warning not to trust the person, Luz stepped out of their house to meet him.

Death, instead, waited for her.

Insp. Ruel Lito Fronda, Gloria police chief, confirmed the exchange of messages from Luz’s phone, which was recovered from the scene. He agreed the text messages were only a ploy.

“Like you, we also meddled into other people’s business,” Albert told the Inquirer.

He said Luz helped build up several cases against local government officials and her recent work involved paralegal services to victims of land disputes, drug abuse, rape and even members of indigenous communities.

She was also putting together a livelihood project for former drug users in Socorro, a reason she had met Almeranez sometime in August.

Albert said they did not personally know Almeranez or Pimentel.

The involvement of the two police officials was a blow to the Philippine National Police.

Pimentel and Almeranez were both graduates of the Philippine National Police Academy.

But records from the police Regional Internal Affairs Office showed that Pimentel was charged with “grave misconduct and serious irregularity in the performance of duty” in relation to a 2015 antidrug operation here. There were allegations of “excessive force” during a drug bust that left two suspects and one policeman dead.

A police source, who requested anonymity, believed Luz was a “contract kill” and Pimentel took the job “because he needed the money to settle the [2015] case.”

And whoever ordered the hit may have been someone that Almeranez could not refuse, the source said.

In 2013, gunmen fired at Luz’s previous house in Bansud town. This happened again last year in Luz’s house in Gloria.

Alvarez said they did not know if the attacks were related.

The family, represented by Juan Tria of the Volunteers Against Crime and Corruption, and Villegas of the CCW, filed a case of murder against Pimentel and Almeranez at the Regional Trial Court Branch 42 in Pinamalayan on Oct. 28.

A separate case of direct assault and frustrated homicide was filed at the Municipal Trial Court by Gloria policemen wounded in the shoot out.

Pimentel and Almeranez stayed under hospital arrest in the Medical Mission Group Hospital here for two months. It was only on Wednesday night when they were sent, under heavy security, to the Gloria police station where they were detained. On Thursday, they were transferred to detention facilities in the towns of Pinamalayan and Bansud, respectively.

Fronda said it took them awhile because Pimentel and Almeranez could not settle their hospital bills immediately and the court had not issued a warrant or a commitment order until Thursday.

“We may be up against big people here but we trust the police,” Alvarez said.

Fronda believed they have a strong case against Pimentel and Almeranez, and were also close to filing charges against the two other gunmen who had escaped./rga