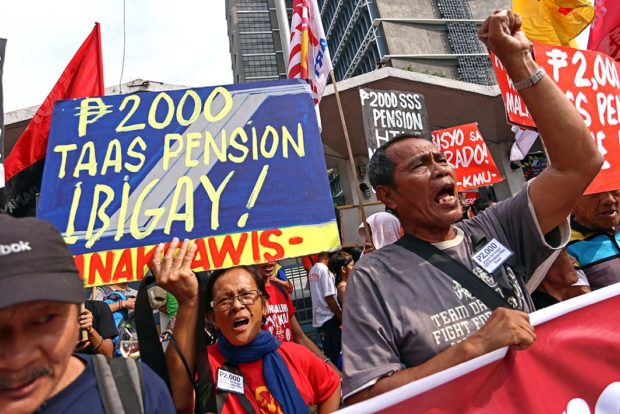 The House of Representatives is poised to approve the proposed P2,000 hike in the monthly pension of retirees under the Social Security System (SSS), a lawmaker said on Saturday.

Last week, a proposed joint resolution by the Senate and the House of Representatives seeking the pension hike was approved by the House committee on government enterprises and privatization, and transmitted to the plenary for approval.

North Cotabato Rep. Jesus Sacdalan, the panel chair, said in a press statement that he and his counterpart, Sen. Richard Gordon, met last Tuesday and agreed that the additional pension would be given in two tranches—the first amounting to P1,000 to be released within this month and the second by 2019.

He said the majority lawmakers agreed at last week’s caucus to pass the joint resolution before Congress adjourns for the holiday break next week.

The House committee had approved House Bill No. 18, which consolidated all 17 bills to increase the SSS pension. But on Dec. 6, the committee opted to pass a joint resolution to ensure speedy approval and implementation of the pension hike.

“The approval and implementation of the SSS pension hike might face delay if what we will pursue is the bill,” Sacdalan said.

Last month, SSS chair Amado Valdez urged the House to pass a joint resolution instead of HB 18. He said that if a law is passed, it would violate the contractual obligation of the SSS with those who are paying the contributions because these private funds have already been earmarked to finance benefits for pensioners.

As of January, there are about 33 million SSS members with 2.15 million retirees receiving pensions, according to the joint resolution.